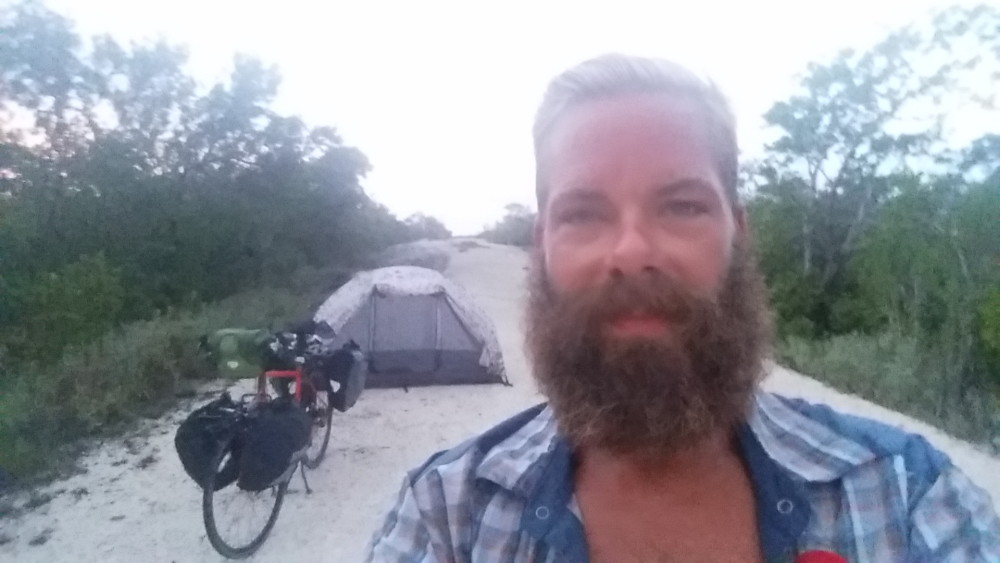 i had been trying to picture my last day for the entire ride. i don’t know what i was expecting. after riding for 51 days i had finished. i knew there were no crowds of people waving ribbons and screaming at me. it was me finishing and it was like most of the ride was: quiet.

i got up at 5:30 and as i was making coffee, i decided there really wasn’t a need to rush out on the road. i could relax and wake up. no hurry. normally from wake up to bike, it’s usually about a half hour. today i didn’t leave for an hour and a half. i think part of it was knowing that that would be the last time on my tour that i’d be cleaning up camp and i was trying to put it off. i took my time. i cleaned everything up as nice as i could, then i noticed that my first tent pole repair tube had ripped. i have two, and brought them both just in case. it’s good that i had one to work with, it’s better that i had two. i know the tent is great quality. it’s an awesome tent. i don’t think it was designed for as much rugged use as i’ve given it, but that’s okay. i wouldn’t have wanted any other tent for the trip. being able to sit up and move around was a big bonus. i saw a few people touring that had bivvys and looked slightly jealous. seriously guys, that’s cool, but my poler one man tent is pretty awesome. even if it did start to come apart after 51 days.

everything was packed and ready to go. i mounted my bicycle, then realized the front was flat. the scab from yesterday just didn’t hold. since i wasn’t really in the most civilized area, i pumped it up with my fingers crossed hoping that it would reseal. there wasn’t a bike shop until key west and i didn’t have any patches left. it was my fault. after pumping the tire and riding to the intersection to turn left, i went to unclip my left shoe like i normally do when approaching a stop sign. it didn’t unclip. i kind of panicked. i pulled my brakes, realized if i stop moving, i’ll fall, so i started riding in a circle. oh yeah, i can just unclip the other side and see what the issue is. no problem. so i did. i pulled over to the side of the road, unclipped the right, then looked at the left. my whole clip on the shoe was turning. at some point i had lost one of the two screws that go in there to secure the plate for clipping. i could tighten it and it may hold, but for safety, i probably shouldn’t clip in for the rest of the ride. i didn’t mind, i didn’t have much farther to go before the bike shop. i pumped the tire up a total of about six times before i got to the bike shop. that’s how i spent my last ride. ride for three miles, pump tire, ride for three miles, pump tire. i arrived at the bike shop, the first that i had been in since tampa. i remember seeing it last time i had visited the keys and was happy i remembered the location. it’s called we-cycle. there’s kind of this pyramid of bike frames welded together in front of the place, so it’s easy to remember. i purchased two tubes and a patch kit, then had a quick talk with the guy working. he was interested in my gear and bike to see how it was setup and how it worked.

riding into key west i decided to have one last big meal. after all, i can’t keep eating crazy like i do because it won’t burn off like it has. i stopped at ihop and warned my server that i would be ordering a large amount of food, but had no problem finishing it all. she just laughed a little and said it was fine. i had three eggs, two slices of bacon, two sausage links, two slices of ham, two pieces of french toast, two pancakes, fried chicken tenders and a waffle. three full size plates of food. coffee and water to rinse it all down. she came by about fifteen minutes later to see all of my plates neatly stacked and all of the food finished. she looked a little shocked. here was this skinny guy who ordered way too much food, then finished it all and did it quick. i had a look of satisfaction on my face that appeared to be growing by the tasks of my last tour day.

after breakfast i rode over to the beach. i didn’t swim, but i just coasted along the beach until i reached southernmost point a short time later. for those who don’t know, key west is small. it’s two miles wide and four miles long. about 12 miles all the way around the perimeter. i could ride a bike around the entire key in about 45 minutes. so, back at the point, i waited in line for my turn in front of the marker. the people in front of me generously offered to take my photo. they asked where i had rode from and seemed shocked when i told them it was seattle. they seemed even more shocked when i told them it had been 51 days. i was really done. i had made it the whole way.

i should feel more accomplished. i don’t know, it feels like i’m just waiting to ride again tomorrow. like i need to get another hundred miles in. i know i don’t. i know there’s bike riding around with lindsey tomorrow, but i don’t have to cover a certain amount of miles before i can call it a day. i won’t have to hurry. i won’t have to be in a rush to get somewhere. i’ll be rolling around with her doing whatever and exploring.

i would like to thank everyone who has taken the time to read along with my ride. especially those who did so and donated to my fundraiser. thank you to all of the warmshowers that hosted me, providing great conversations and comfortable living for a night. i’ll leave the fundraiser up until next week because i have other things to do and maybe you pass this along to someone and yell out “he finished!” and that next person wants to donate. over the next week, i’m going to route my actual trip and calculate the total miles. i’ll be typing out a final post, not the same as this one. it will have a collection of thoughts about the big tour, things that i wanted to happen, things that i would change, and even a link to all of the photos on my camera. i haven’t even had a chance to see those yet. i hope there’s some good stuff.

for those who were waiting to find out, she said yes(of course).