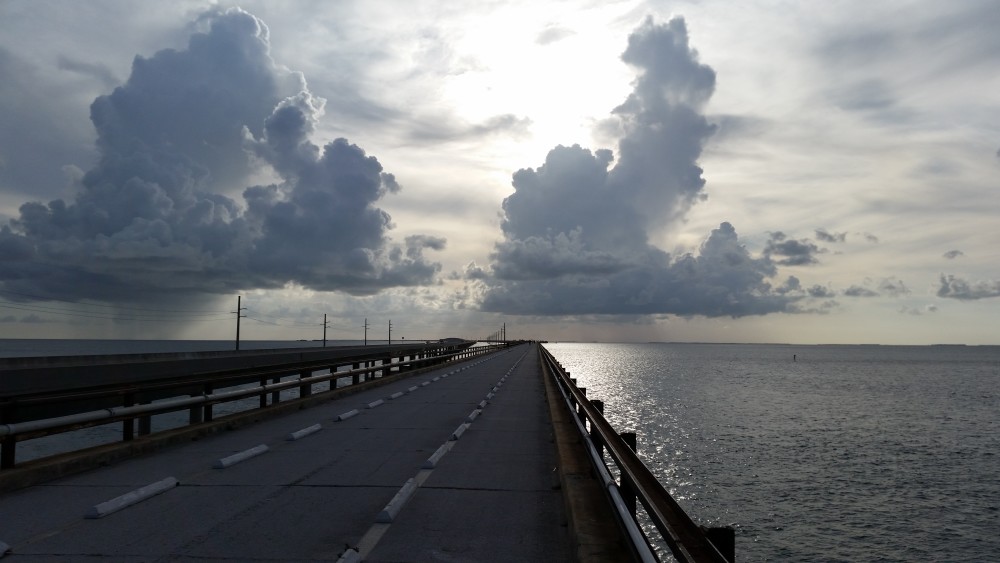 i had a great ride today. i started early and just took my time all day. i didn’t want to rush the ride at all. i stopped at a few places, maybe trying to delay the last full day of my ride, but i eventually made it to camp.

last night the mosquitos were rough. not as bad as a few other places. there’s only so many bites you can take and only so much lite little buzzing by your ear until you begin swatting around crazily and covering yourself in bug spray. i brought a small bottle of bug spray and i’ve only used it two or three times. most of the time the bugs stay away and don’t like me. i guess i’ve gotten a little tastier as i move along.

i left camp and started my trek through the keys. i saw a few places in key largo that looked interesting, but it was so early that none of them were opened yet. no problem. i can always stop at them with lindsey on the way to the airport later this week. i started taking the bike trail that runs parallel to route 1 through key largo. it’s nice that they have that, separating you from the road, but the road also has a bicycle lane for those brave enough to ride it. the trail is more for those people that are taking their time and not in a hurry. i was a qualified candidate for that.

it was sunny, it was hot, it was a beautiful day. continuing on my ride, i made it through tavernier and into the plantation key then to islamorada. i have been to islamorada before and remember things about it. it had changed a little. the seafood buffet that was there is no longer there. i heard there was a fire. it’s being rebuilt, or at least something in it’s place. there was a brewery! i saw it and stopped on the trail, then looked at what time it was. it was before noon, but i figured, hey, when in rome…(drink). i crossed the street and rolled up. dang! what kind of place is this! not to sound like an alcoholic, but it was monday at 11:30am and i was sitting outside of the place waiting for it to open at noon. a guy came out a few minutes after i sat down and asked if i wanted to sit in the air conditioning inside. yes please. i went in and we started talking, he asked about my bike and i told him about the ride. he said, “your first beer is on me, you deserve it.” well thanks! i asked for something golden, and he gave me their golden ale that has a hint of key lime. perfect. a few minutes later the other bartender showed up and then the owner. we all talked and shortly after my second drink it was time to get rolling again. they invited me to stop back in with lindsey on the drive to the airport. those guys at islamorada brewing were pretty welcoming and had some good beer.

next was lower matecumbe key, then long key. after those i stopped at a disappointing tiki bar in long point key. i don’t know what i was expecting, but it wasn’t that. maybe more tiki stuff rather than just a few license plates on the wall and a wooden bar. there wasn’t really any tiki in this tiki bar, it was just a bar. i kept riding and kept measuring the time with my hand. it’s much easier than pulling my phone out when i’m riding. plus it gives me the rough estimate of when i should be looking for a campsite. marathon seems like it has grown, or changed, things can’t really grow here. the land is the same size and won’t get any bigger. the property will change and things will change, but it doesn’t get larger. i knew that after marathon, i’d have my only real challenge of the keys. the seven mile bridge. right before i got on the bridge, the winds changed and suddenly they were at my back. for the first time in florida, i had the wind behind me! it was a big help going over the bridge. i was riding 22 for a while, slowed to 16 while i went over, then up to 24 on the way down. 22 when it was flatland again. the winds were in my favor and i knew it wouldn’t be that way forever so i should use it as much as i could. i pedaled hard, moved quick and passed a bunch of stuff. the trail that ran parallel had been gone for a while, but new ones appeared so i got back off the road. this happened thorughout the day. the path would end, move to the bike lane, see a path on the other side of the road, cross the road and get on the path, then repeat.

i arrived in the bahai honda key then promptly got a flat. it was probably something i picked up while speeding down the bridge. i looked for a puncture in the tire or debris, but didn’t see any. i had one tube left that i had patched, no patches, and a few scabs. i switched tubes and about five miles later, same thing. i pumped it back up and rode for a mile or so, then it was flat again. dang. i pumped it up, then rode to the gas station so i would have more light. i put on a scab, covered it in rubber cement and decided to cut up one of my spare tubes that had a puncture. i sliced it all the way around and used it as a liner in my tire before putting the scab tube in. it helped. it held is what i should say. it made it all the way to upper sugarloaf key, where i needed to camp.

it was a long day and i had a lot of things to think about with my whole ride almost behind me. i saw there was a warmshower in marathon, but i didn’t reach out. i feel dennis was a good endpoint to my warmshowers for the ride. we got along great, did similar work and we rode almost the same exact route(his was from ft lauderdale to seattle). i don’t know the person in marathon that i could have stayed with, but really, i doubt they would have more in common with me. as many nights as i’ve had spent in my tent camping, i decided that i should have one more. one last good night in the tent before the ride is over.

tomorrow i’ll be riding 21 miles into key west. that will be the end of this tour. i’ll post again tomorrow after i finish, then i’m taking some time away. within the next week or two, i’ll calculate my total mileage through the route that i took, upload photos from the camera, and post a end of tour summary. it’s been a fun ride…day 50 done.