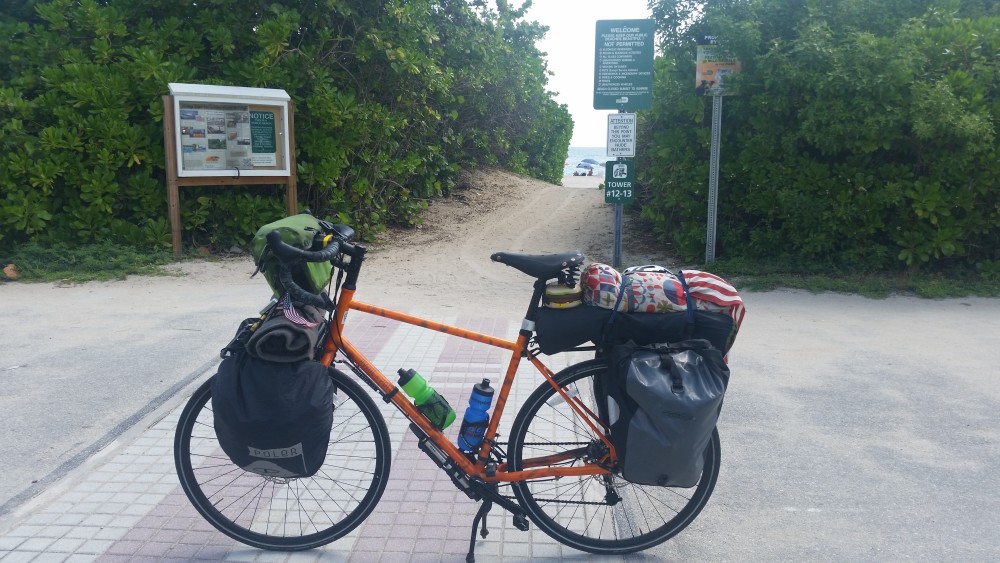 the first thing i did after waking up today was take a shower. it doesn’t seem that odd, but it is to me. i’m a morning shower kind of guy, but almost the entire ride, i’ve taken showers at the end of the day(when i can). the morning shower is great because it wakes you up and has you start fresh. it was a good way to start the day.

i had breakfast with dennis. he seemed happy for both meals that we shared that i wasn’t a vegetarian or vegan. there’s a high number of cyclists that tour and are one or the other, but really, i think if there’s food to be eaten then there’s no reason to turn it down. your body needs as much as you can give it when you do a ride like this. i eat a ton of food, but i’ve still lost a ton of weight. i’m going to have to stop eating like this in few days because i definitely don’t need to gain more weight again.

i asked dennis for directions and route advice, he provided them both. for some reason google maps wanted me to take a road that had no shoulder and cars that travel high speed. no thanks google. my first stop was the beach. it was twenty miles away, and he gave me a great route to get there, but i missed the turn and decided to keep going the way i was. i was right next to port of the everglades and the ft. lauderdale airport. there was a freight train that was stopped on the way and i saw a few cyclists waiting. we talked for a few minutes and they seemed shocked that i had rode all the way from seattle. i guess i don’t think of it as this big thing because i’m doing it, but really, most people that i talk with are either shocked or amazed or inspired. they changed their direction and rode a different way to avoid waiting for the train to pass. i thought it would be a good time to eat the bananas that vance had given me a few days before. i sat on the curb and started eating. a few minutes later another cyclist pulled up and suddenly he said: “hey, you’re from chicago?” i didn’t know what to say. i don’t think i have anything that shows that, no, i’m sure of it. i said yes, how did you know? there’s a reflective pin on my rear left pannier that was given to me from po campo, in the shape of a chicago flag star. he showed me his chicago tattoo and told me that he used to live there. we talked for a few minutes and he said he had to take my picture. the train started moving and cleared the road so we both went our ways.

riding through the miami area on a sunday morning is excellent. there’s nobody on the roads and you can do just about anything. there has been a few times where i wished there was less traffic since i have been on the east coast of florida, but today there was hardly any. it made getting to the beach really simple.

when i left the beach and started going more into the downtown area of miami, traffic picked up and i decided to see if there was a better route. i updated google maps yesterday and the timing for the app is off completely. it was saying it would take me twelve hours to make it to homestead, which was only about 40 miles. i know it’s never taken me that long to do 40 miles. even in the mountains. i found a bicycle path that ran from downtown miami all the way to florida city, south of homestead. it was all i needed. i don’t like to constantly check my maps to see if i’m going the right direction and having one path the whole way makes that easy. out of the entire path, the only things that i don’t care for about it are the tree roots that were lifting the pavement in a few spots. they slow you down and can throw you around if you’re not careful. the downfall of one direct path is that it can seem like you’re not moving much. i thought i had gone a lot farther than i had a few times. eventually i got to the end and made my way onto route 1.

route 1 is the final road. it’s where i will be for the next few day. today though, i was only going to ride 20 miles on it, over to key largo. the wind was in my face the whole way and the storm that i had been watching move away decided to slow down. it should have been gone by the time i got to key largo, but i got the tail end of it. it rained for the last five miles of my ride. i didn’t mind. there’s not really anything that can slow me down or make me not want to ride to the end at this point. if it’s raining, i’ll keep going. if i get a flat(hopefully i don’t) i’ll use my last patched tube and cross my fingers. i could definitely fix another tube as a spare, but i’ve used the patches i have and now i’m down to my scabs that i don’t want to have to start using. those were more of an “if i need them” sorta thing and it hasn’t got to that point. i used my last patch a few days ago in indiantown, and i feel that i should be able to make it the rest of the way without a flat. you never know though.

i had a camping spot picked out in key largo before i got here. i didn’t know if it would be a good place to camp out, but after seeing it, it’s perfect. depending on the riding conditions tomorrow, i have three other spots picked out at various lengths so that i can use them based on the mileage i cover. i don’t need to go 90 miles tomorrow, but that’s the farthest campsite that i have in my list. the rest are closer. if the wind is behind me and i feel like i can make it, sure, i’ll take that one. i’d rather stop sooner so i have some more miles to ride before lindsey arrives.

i’m camped out for the night, but i know that i’ve got 105 miles from here to key west. i could do that in a day easily, but i’m going to split it in two. i need to kill some time before lindsey arrives on tuesday, and if i ride too quick key west then i won’t have a place to stay. i’m sure i could find one, but i’ll enjoy the last few days and take it all in. 85(ish) miles for the day, plus a stop at the beach. day 49 done.