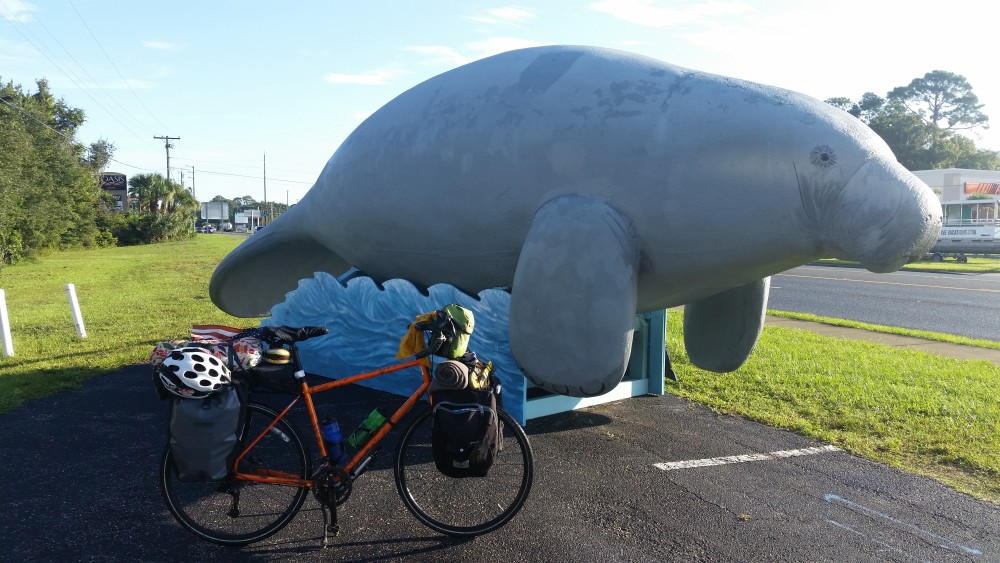 it’s hot. it’s humid…but at least it wasn’t raining. i woke up in my tent in the middle of the night and had to go…ahem…relieve myself. i was standing out about thirty feet away and started thinking about all of the snakes that i’ve seen…and i was in a wilderness prairie. i thought, oh man, what if one of those red banded snakes, scarlet snakes or hog nosed snakes came up and bit me. i wouldn’t know what snake it was since my light was on my bike and i could accidentally step on one in the dark. needless to say, i spent the rest of the night in my tent. i don’t remember which snakes could be venomous and i’d like to keep it that way.

i woke up early, made coffee and hurried onto the road. it went by quickly. i went about thirty miles or so and my gps battery died. sigh. limited power now that my big battery pack has given up holding a charge. i looked at my phone, then looked down and saw a phone on the side of the road. i picked it up and it turned on! so i saw there was twenty missed calls from the same number, called that number back and asked if they knew who’s phone it was. it was their handicapped son’s phone. i told them where to meet me and they came by about a half hour later. had i not missed the turn that i was supposed to make on the bike trail and went an extra quarter mile, i would not have found the phone and wouldn’t have been able to return it. they were very grateful, but i couldn’t help thinking that the time i had spent waiting could have been used for riding. i don’t mind doing a good deed like that. recently it’s been a minimum of one good deed a day and it makes me feel good.

i got onto the trail that i had passed the accidentally and it was great. nice paved trail, but i could have done without the hills. they weren’t big hills by any means. the problem with them was that i was riding into the wind with them and it was slowing me down a bit. i thought that the storm from the previous day had passed, but there was still a little of it coming towards me. it rained for a while, then i got a flat tire. i thought it was going to be easy when i got to florida! yes, it was a trying day, but i made it through.

the trail branched off into another trail which meant i only had about thirty miles left before i got to clearwater. i had plans to stop at the innerworkings office(the company that i work for has an office in clearwater) but i didn’t think i would make it with all that had slowed me down. i looked up a bike shop that deals in specialized so that i could stop in and talk about my rim being replaced via warranty. there was one a mile or two away from the office. perfect. crystal, one of my co-workers texted me a few times asking if i would make it in before closing time, but i told her i would be late. she said it was fine and i was happy to have her check in with me. she explained that everyone was excited to see me and it would be a treat to have me stop by. it’s great that she made me feel so welcome. the company is lucky to have such great employees like her.

when i arrived, there were only a few people in the office and i immediately told them to hold their breath until i had went to the restroom and washed up a little. i didn’t want to show up in the condition that i had, but there wasn’t much of a choice. i hadn’t had a shower in a few days and the heat and humidity had made me a sweaty, smelly mess. i cleaned up and went out to reintroduce myself to everyone. it was great! they all had so many questions and were so interested in my ride. i was happy to talk about it and tell them about my experiences. we decided to get dinner across the street and continue our discussion. sadly, not everyone could make it, but happily i had a great dinner and a few beers with sarah and crystal. we talked about everything. i haven’t been able to have conversations with people like this for a while. most of the people i meet i only get to talk to for a few minutes or a few hours, but they knew me and what i was doing, what work i have and i knew them as well. the clearwater office was an incredibly welcoming experience and i’m glad that i had a chance to see everyone here. innerworkings is a great place to work and i’m happy to have such amazing co-workers.

by the time dinner had finished, i knew the bike shop was closed. i could stop at another tomorrow. i just had to get to my warmshower(shannon), clean up and sleep. only six miles away, closer to the gulf of mexico. riding towards the gulf in the evening was pleasant. i could smell the air from the large body of water and it reminded me that i haven’t had a chance to find a beach yet. i really want to swim soon, but i may just wait until i get to the east coast. the air coming in from the gulf also had a nice cool breeze which i was happy to have after a hot day.

my total miles for the day were 110 and my body knew it. i have to stop and stretch my back every ten or fifteen miles doing these centuries. it’s nice to cover so many miles everyday. it’s been four or five days that i’ve done centuries. florida is just flying by. i know it will be a little slower when i get to the east coast because of all the congestion, but i’m okay with that. i should arrive over there tomorrow night. good conversations, lots of miles, dinner, beer and great people made this an excellent day. day 44 done.