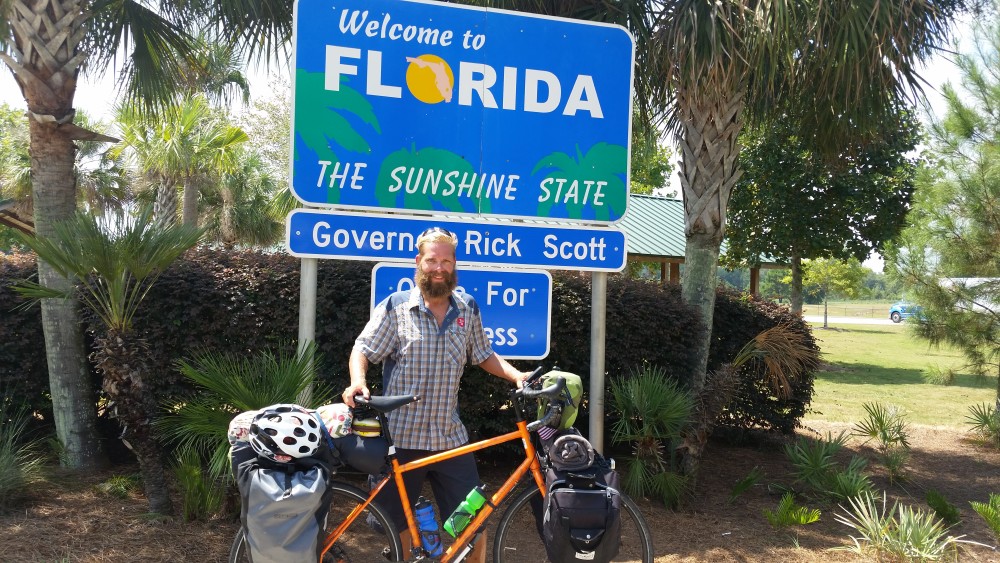 today was an emotional start. i woke up, cleared up camp, made coffee, relaxed, then got on my bike. i had a flat to start the day. rather than fix it in the dark, i figured i’d pump it up and ride until light to get into a parking lot somewhere. about five miles later, it was time to fix it. i have been putting off rotating my tires for about a week now, but i thought this would make a great time to do it. it was early, i had plenty of time in the day and i had a flat to fix. yesterday i noticed my rear wheel was out of true and today i could look at that as well.

i laid the bicycle down and removed both wheels. deflated and removed the front tire, and then the rear. when i looked at the rear wheel, i noticed something i didn’t want to see. my rim has a tear in it. it’s right by a spoke and there are three others near it that look like they are in rough shape. this sucks. i thought the pedals were the worst of the issues i would have. i can’t fix the rim being ripped. nobody can. it needs to be replaced. i put everything back together, rotating the tires so they could get a more even wear. i texted lindsey and she called, then the emotions came in a big wave. i got a big case of the feels.

i’m not sure if it was entirely the wheel that caused such a moment, but knowing that i’m nearing the end of this journey. i am about to enter the fifteenth and final state of the trip. i’ve been through so much and met so many wonderful people. i’ve found out more about me and my body, and i’ve had plenty of time to think about everything. it was a difficult way to start the day and definitely not how i had expected it to start.

cruising down the last stretch of alabama, the heat and humidity got stronger. it was my next big challenge. adapting to this weather over the past week has proved to be difficult. especially with becoming sick a few days ago. my throat is still a little sore, but i’ve basically recovered fully.

crossing the border from alabama into florida, i had to get on the interstate for a mile. i was nervous about it, since the cycling culture in alabama isn’t as welcoming as it could have been. immediately after crossing the border it was like night and day. the road was freshly paved and there was a bike lane on the interstate. it’s like they knew i was coming and had been on rough roads for so long. i stopped at the welcome center and they offered me a glass of orange juice. what a way to feel welcome. they even had free state maps. score one for florida!

as i’ve been to other states with similar roads, i was waiting for the cycling lane to stop. when it did, a sidewalk appeared. when the sidewalk ended, a cycling lane appeared. all the way to blountstown. i’m amazed at how great of a cycling road network is here and i’m excited to see more. google maps shows a ton of highlighted green roads that are bicycle friendly.

about twenty miles away from blountstown, i saw clouds forming. big clouds. i wasn’t interested in seeing another storm, but i couldn’t avoid it either. i kept going and eventually the storm was above me. when the rain started, i jumped off of my bike, put on the rain covers on the front panniers, then covered my wool blanket with the garbage bag i have. the rain was warm and felt good. it had was nice to have it rinse away some of the smell that i’ve developed over the past few days. you know it’s bad when you can tell you don’t smell good. normally you may notice when you’re in a closed area, like a restroom or something similar, but today it was just everywhere. i saw a walmart on the way and thought it would be a good place to stop for a moment. i went inside and remembered that i haven’t checked my weight since i started the tour. i had purposely gained 30 pounds a few months before leaving so that my body had fat to survive off of when i was riding. i knew i had lost some weight and it was time to check. i’ve lost a little over that amount. i’ll post the numbers as well as before and after photos when i’m done.

i rode through the rain and called my warmshower(david) at the place he had mentioned. he came to the store and picked me up, then drove down a side road and turned into a very hidden driveway. there is a house he owns, that he’s been working on and fixing up, and it was mine for the night. he even brought me two beers so that i would feel more welcome. since my early arrival, i’ve eaten, showered, did some sewing, reorganized my gear and  cleaned up. there was a storm that passed over, somewhat heavy, and the power had flickered off for a moment. it didn’t matter. i feel very comfortable and am ready for a good nights rest.

crossing into florida marks the last state i will be in for my tour. fourteen states have come and gone, and now i’m almost done. i’m sure i will have more emotions over the next week, but i can’t avoid those either. now that i’m in blountstown, i can follow my itinerary and finish in seven or eight days. of course i will slow down once i get to the keys, so that i can meet lindsey on time. i’ve covered another century today and it felt great to get some speed on the flat lands in florida. i can hope for good weather the rest of the ride, but i know rain here can be unpredictable. day 42 done.