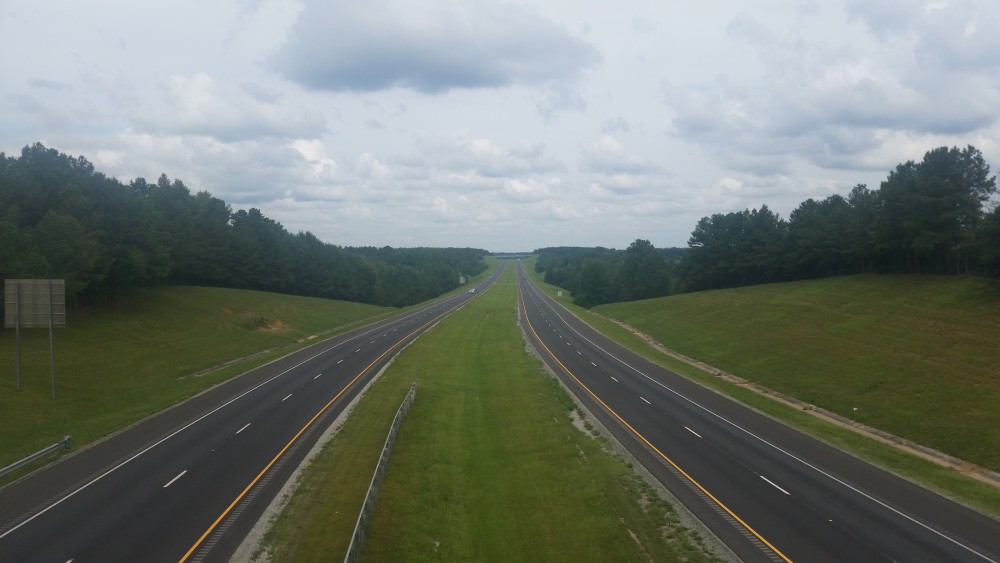 today was enduring. being sick and riding a hundred miles didn’t sound ike a great idea when i woke up, and when i got on the roads of mississippi to start riding, it was worse.

as much as i want to leave early to avoid riding in the dark, i need the sleep so that i can recover a little. i slept in until 6:30 because my body won’t let me sleep later from so many other early days. i rode into fulton, mississippi rather than avoiding it, adding another six miles on my trip because i wanted to get some medicine. when i got to the store i looked over the medicine selection and determined that it was a bad idea to get anything due to the adverse effects it could have on my body. it may make me feel slightly better, but at the same time, my body may react differently to it.

i crossed the border into alabama and looked at the map. there were only three towns that were on my ride today and i needed to make sure to stock water at each of them due to the heat and humidity that the day was going to have. just before entering guin, alabama, my right pedal started making a clicking noise. that’s no good. that was the same one that wore out a few days ago when i had to buy new pedals. i opened the cap on the end and looked inside. it was dry. i guess the people that make pedals for bell just don’t understand the importance of grease. there was a fine metal powder inside, indicating that the pedal had started rubbing so much that it was deteriorating. i put a bit of oil inside, which i didn’t want to do. my oil is about halfway gone, but it’s expensive oil for chains, not really something that you would use on a pedal. oh well. any sort of lubrication is better than none.

just before the border, a guy pulled over in a truck. maybe i looked sick, tired, or just interesting. we talked for a few minutes and he offered some ice water. he told me that it was rain water and it was the best thing in the world. i drank some and it was good. his big question was: “so you’re out riding around the country, living free, nobody tells you what to do, nobody owns you?” i don’t know if it was because i was in the south, but i immediately thought of slavery when he asked if anyone owned me. it’s true, i’m living free, without people telling me what to do. the late burt shavitz, creator of burts bees, had a documentary created about him a year or two ago. one of the things he said in the film is “no ones ever owned me, no ones ever going to own me. you can rent somebody, but you can’t buy them.” thinking about that, we parted ways and i had to keep on riding.

i stopped at guin and talked with the attendant in the gas station. i couldn’t remember what the town was that i was going towards. i couldn’t remember what camp i stayed at last night. things are really a big blur today. after looking through my map again, i remembered i was heading towards tuscaloosa. he recommended a shorter way, that had less hills. when i looked at his route on my map, i saw it was about twenty miles longer and there were more hills. i told him that mine was faster and showed him the grade chart. he seemed surprised. he then told me to be careful at the lake lurleen state park because they have been finding alligators around there. someone had let a bunch of baby alligators loose into the lake.

i rode another few miles and laughed a little. there’s a town next to guin called gu-win. i wondered how often they get mixed up and confused with each other. the pronunciation seems like it would be the same.

the next town i stopped and refilled ice water in mcdonalds, but didn’t want to stay for too long since i had many more miles to go. it seemed like i wasn’t making any progress, like the harder i rode the slower the miles passed. i feel exhausted.

i rode another twenty miles and stopped in fayette, alabama. from here, it was about forty miles before camp and nothing in between. my body is sore, but my back is really sore. it could have been the way i slept or just riding a bike for the past 3300(ish) miles. i have advil with me and took three of them while texting with my sister for a few minutes. she was just checking in and wanted to make sure that i was doing okay. i like that. aside from lindsey, people don’t regularly check in. it makes me feel like people still care. after not really being around many people that i have created a bond with, it definitely becomes lonely riding a bicycle on the road.

i was happy that my day didn’t have any dirt roads, because a different bolt on my rear rack has become sensitive to them. it starts to shake loose and i have to tighten it. maybe i’ll put some loctite in it like i did with the others. the wear is definitely showing on my bike in various places.

i stopped at one more store that i was surprised to see open. it was about ten miles from camp. i got a beer and refilled my water bottles. the cashier asked if i liked chicken and i said of course. she asked if i wanted some, because they were closing in a few minutes and it would be otherwise wasted. two breasts and a drumstick went into a styrofoam box and i secured it to my bike. i was thinking i would eat it when i got to camp. a few miles later the road turned to dirt and hills. sigh. i’m so done with dirt roads. i’m so done with hills. i am excited for the days of florida where it’s flat. lindsey tells me that i’ll miss the hills when i’m there, but i doubt it. my legs don’t agree with the past few days of centuries and hills. one or the other they say. so i knew i had five more miles on this dirt road and it was dark out. the moon hadn’t yet come up. i stopped, sat down in the middle of this dirt road and ate my chicken in the dark. it was really peaceful, but i imagined that if someone were to come down this road how crazy i would look. covered in sweat, bicycle on laying on its side, no shirt, eating fried chicken in the middle of the road. yes, i probably looked crazy.

i got to the campsite and they were in the process of closing the booth. the woman inside opened the window and said “campsites are $32”. to me, that’s crazy. in tennessee i was paying $8. the most expensive site i’ve had was at the koa, which was $34. this place better be luxurious. she told me that the state parks inside alabama were all this price. i let her know the trends of pricing that i’ve come across in the united states, and also informed her that it was the most expensive state park i’ve been to. when i finished complaining and making jokes about how there had better be a free breakfast buffet, i went and setup camp. i’d like to say that it was a beautiful park, but it’s so dark i can’t tell. i went to take a shower and almost fell asleep standing up. it was a long day and i needed rest.

i rode 106 miles today, making it the the third day that i’ve traveled a century. 300 miles, three days. not bad considering how sick and exhausted i feel. maybe tomorrow will be an easier day. according to my timeline, if i continue to ride a century everyday, i’ll arrive in key west on the 10th. i can’t do that, because lindsey won’t arrive until the 15th. when i get closer to southern florida, i’ll be taking some rest days, maybe just doing 50 miles or so for a few days. it will be nice to have some rest. i can’t wait. day 37 done.