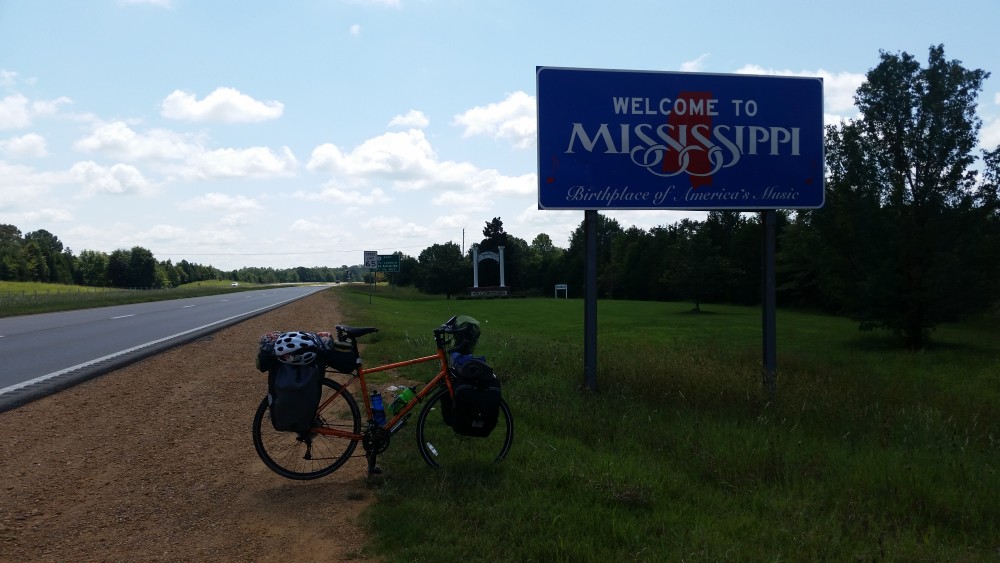 my body is sore. i’m sick. it’s been getting worse for the past few days. yes, it sucks, but i’m going to have to push through it.

when i was leaving chickasaw state park, i looked closer at the map. there was a trail that i could take that would be easier, and maybe more scenic. sure, i’ll go that way. after going about a mile into the trail, it suddenly became very hilly, steep hills, hills that i had to walk up. it didn’t save me time.

a few hours later, a few miles later one of the roads turned from pavement to gravel to chipstone, to sand and mud. that road was also a road that i couldn’t get through on my bike, but didn’t want to backtrack for an additional five miles. google, you’re really killing me today.

the tennessee roads have been great, shoulders/bike routes on the highways, great upkeep and just friendly people. when i crossed to mississippi, the roads changed. i was on a highway with a bike route, however it faded to gravel right after the mississippi sign. the roads here are not in good shape. i’ve only been here a day, and i’m considering it as one of the worst states for road conditions.

i’m moody, i apologize. after losing stuff yesterday, getting rained on, then trying to dry off today(still), i realized my favorite jerzey from ten speed hero is now gone. i called the campsite and they sent someone to look, but no dice. also, i got a flat tire today. also there’s an issue with my derailleur that i couldn’t work on last night because it became dark too fast. also i’m sick. i really want everything to be fine, just relax on the beach with a drink. google maps says i’m getting closer, 1000 more miles. i can do this. i can do it quick.

i finished a century today, making it two days of centuries, hopefully 10 remaining. it’s going to be tough with being sick and waiting for daylight to work on the bike. day 36 done.