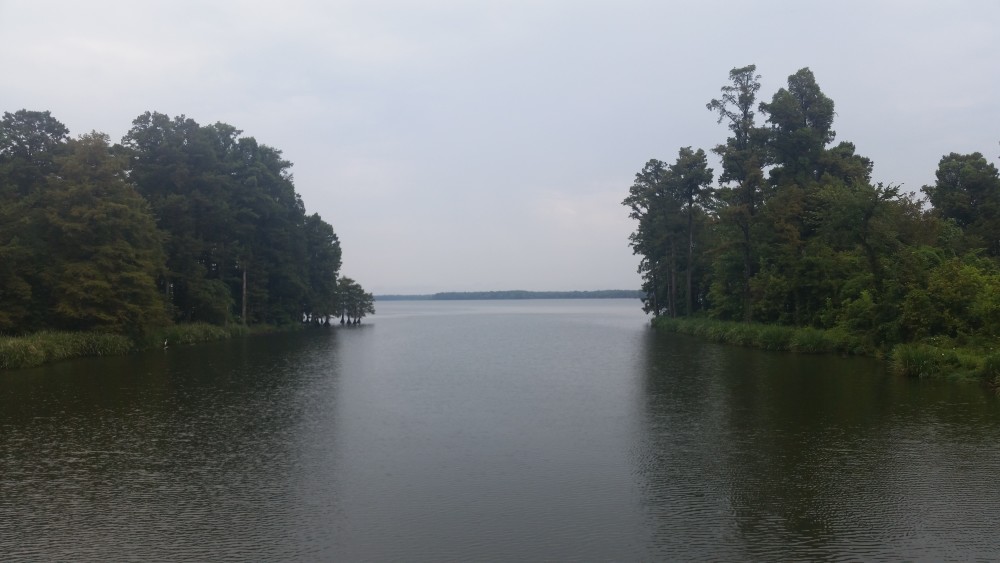 everything is wet. the idea that i had to start the day didn’t work. my itinerary said i should go to memphis. i looked at the weather as i do almost every morning and saw that there were storms all over memphis and directly west, that would be coming to me all day had i gone south. i made the decision to head southeast, more efficiently toward the destination.

beginning the ride i traveled south and came to a small town. i would stop for water, maybe a snack. the two gas stations were closed, well, one was out of business. i went into a restaurant and someone told me that the dollar general was open. it was a few blocks away, so i made the trip. i got water and a few snacks. while loading everything on my bike, i forgot to put the snacks away and they were on my rear rack. a few miles later i stopped to grab one, but then realized they were on my rack. which they no longer were. dang. couldn’t backtrack and get them again. oh well.

i rode for about twenty more miles and my right pedal that has been slowly acting up seized. it wouldn’t move. i laid the bike down and disassembled the pedal as much as i could with the tools that i have. i saw the impending part inside. a bearing had come loose and was rubbing on the nut that holds the pedal together. i didn’t have a socket that would fit in there to loosen it and put it back in place. i loaded it with oil, opened a screwdriver on one of the multitools that i found, used another to hammer it a little. i popped it back, further away from the nut, added more oil and tried again. i got it good enough so that the pedal still moved, but wouldn’t function properly until i got to a bike shop. i looked on maps to see where the closest one was. there were three motorcycle shops in friendship, tennessee, but no bicycle shops. the nearest one was in jackson, tennessee. 55-60 miles away. i doubted that the pedal would last that long with the slow rolling hills and terrain to cover. the closest store that may have something was walmart. i carefully rode the remaining five miles putting as much pressure and weight on the left as i could so that the right would function the way there. i got in and saw two pairs of pedals, neither of which would fit my crank arms. dang. as i scanned the shelf, i noticed one more pair that also had an adapter with them. success! i took them to the register to see that they had been mispriced from $29 to $7. i didn’t say a word. i went out and began to change them. a curious employee came to talk and wondered about my trip. i asked him when the clouds of gnats would stop, as they were sticking to me and everything on my bike. he said they never end. hahaha. i asked how they keep their windshields clean, to which he replied: “we don’t”. fair enough. the delay of the pedals wasn’t something that i wanted to deal with, especially so far from a shop. my shimano dual sided pedals probably got 15k miles on them, so i’m happy that they lasted as long. i’m not giving up on them. i had texted bailey, a friend from my favorite bike shop in chicago(comrade cycles) and he said that the bearings weren’t serviceable, but they were replaceable. i’ll take them in for some service when i return.

continuing on my way i was happy to find that there was a bike lane that ran most of the length of friendship along the road i was taking. it wasn’t being used by anyone else, but i’m glad it was there. i looked further on my route to examine where my next few turns were and saw something amazing. bill murray road. no way. seriously? out here in the middle of nowhere? i had to get a picture with it, after all, no one will ever believe you. it was on my route, and i had a few minutes to spare. when i arrived, i looked for the sign. the only one i could find was fire house road. no bill murray road. someone at google maps had a good time with this thinking that it wouldn’t be discovered. screenshot is in the photos below.

i merged onto us route 412 and saw something out of place. a bike route sign. the highway has a bike route sign on it. the shoulder is probably 15 feet wide, nicely paved, and this highway is a bike route. that’s great. i’m happy with that and rode it happily.

a short time later i saw some heavy clouds to the south. i stopped at the dollar general again(they’re very common here) and picked up a drink. i sat out front, watched the clouds and looked at the weather. the storm would stick around jackson for five hours or so, directly where i was heading. the thunder that followed the lighting was loud. it reminded me of when i was with alexei in south dakota when the thunder sounded like it was ripping the sky apart. the rain was so light that i figured i could ride through it. about a mile later it was a huge downpour and i had to take shelter. a closed car dealership was a nice shelter, seeing that they had power outlets and rocking chairs under the awning was even better. i sat and waited for the storm to lighten. another unexpected delay.

once it had lightened up, i rode more. the rain started again but i decided to push through. after all, if i’m going to get wet, i’ll be wet. there wasn’t any stopping it as i was already soaked. the rain felt nice from the humid and sticky weather, plus it rinsed the bugs off of me. i stopped about ten miles later at a combo gas station and mcdonalds to use the restroom. when i had refilled my water bottles, a woman came up and asked if i had a few moments to discuss what my experience was and a few other things. she asked if i had ordered, i said no, and she offered to buy me food. thanks! i shared my experiences with her and she was very interested. she’s hoping to do a ride soon that would be her and a few others crossing the country stopping at the rotary clubs to do fundraising for als(forgive me if that’s incorrect). i told here the issues that i’ve run into, the advice that i’ve picked up and my opinions on how i’ve done. she said: “i wish there was a website that could have told me as much as you have about bike touring…”. my reply was simple, i have that website, it may not have everything, but it’s definitely got more than i expected to learn. i gave her my contact info and we parted ways. i need to go through my bags because i know i’ve got more cards somewhere, i just can’t find them.

i started riding again and reached for my second handkerchief so that i could wipe away some rain and sweat. gone. where was it last? i pulled it out when i stopped to change pedals. i’m losing things today! the storm slowed me down, the pedals slowed me down, i keep forgetting to put things away. i’m glad i haven’t lost anything that i need, but the food and handkerchief would have been nice to keep. this makes for three things that i’ve lost. my rain jacket in sloan, iowa is the first thing.

i rode more. i was about twenty or thirty miles from jackson, riding through the rain and a gentleman slowed down to see if i was okay. he offered a ride the remaining way, even though it was out of his way. i graciously accepted, knowing that i wouldn’t have made it to the campsite before 10pm with all of the things that had happened. we talked about bikes, touring, what setups he has, what setups i have, camping and many other things. his name is allen posey, and we became fast friends. he told me about how he used to camp at chickasaw state park when he was a kid and hadn’t been there in many years. he seemed excited to see how things have changed. we made our way there and the campsite is great. the lake is beautiful and oddly enough, there aren’t mosquitos. it may be the rain, but i feel like they would have come out already since the rain has stopped.

i plan on attempting to do centuries every day for twelve days, but we’ll see how that goes with weather and my body. this was supposed to be the first day of it and i did get a short ride, so maybe i’ll start tomorrow. i’m happy to be drying out in my tent after a nice warm shower and great conversations all day with everyone. tennessee has been a nice place to visit and i’ve met some excellent people, i just wish there was something we could do about those gnats. i would have had more photos, but i didn’t want to pull out any electronics in the rain. day 35 done.