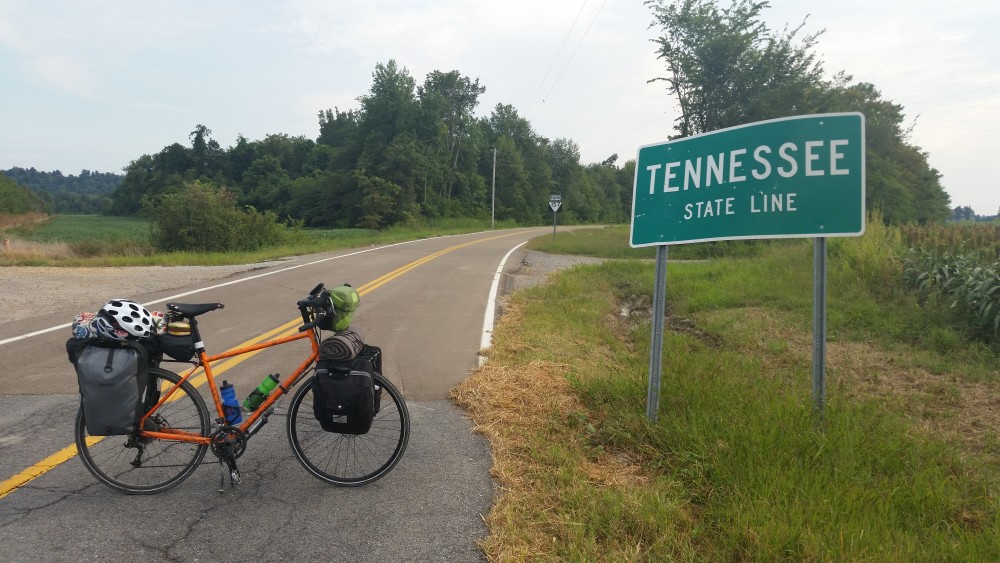 today started simple. i had a pretty steady course to get through the rest of illinois, kentucky and then into tennesee. winding down the side roads was easy. low traffic, after all, there aren’t many people that want to go into cairo and i believe that the ones that did want to go were still sleeping when i left camp.

i had about fifteen miles before cairo and they blew by easily. i was warned that the bridge from illinois to kentucky in cairo was narrow. thankfully there wasn’t any traffic. so little that only two cars passed me over the entire bridge, which i believe is around a third of a mile long. the two that passed waited patiently for other cars in the other lane to go, just like normal traffic. i was amazed at how easy it was. i stressed out over nothing.

into kentucky had one hill at the first town, which i climbed and saw a gas station and determined i would need a coffee to congratulate me on another state passed. it was delicious. the last time i had coffee was around four days ago, in st. charles(thanks kelly, again). i figured it was time to get more instant coffee since i had run out sometime in south dakota. i’m not excited about it, but hey, it’s got to be at least comparable to the gas station coffee. right around the corner from the gas station i saw another cyclist. gasp! i keep thinking that i won’t see any others touring, and then get surprised. he seemed just as surprised. his name is eagle and he had mentioned that he was touring for roughly two and a half years. he was heading toward st louis and i gave him my travel advice from the few days that had passed.

riding through western kentucky was amazing. i never thought i would say that i felt kentucky was beautiful, but really, it is. the trees everywhere were nice for shade and they all had vines covering them. i started trying to guess what they looked like shape-wise, because some of them definitely had character. my favorite was a gorilla on one knee. i should have taken a photo of it, but it’s okay.

about halfway through my kentucky voyage, i was flagged down by a car. a woman jumped out excitedly and said, “you look like you need a map!” i said sure, and we began talking as she pulled a bundle of maps from her trunk. her name was norma pruitt and she is the executive director for the kentucky great river road national scenic byway. she mentioned that they are trying to get more trails for bicycles, pedestrians and atvs put in, which would be great. i’m all for touring on trails, especially if they are along scenic byways. i talked with her and her husband about my travel and he seemed inspired that i was riding for charity with the livestrong foundation. he has a rare disease that is hereditary associated with hsp(heridetary spastic paraplegia) and pls(Primary Lateral Sclerosis). he also is working on spreading the word of his issue as much as he can, while he still can. i felt for him as he mentioned his children also have a 50% chance of developing the same issue and currently there isn’t anything that can be done to cure or prevent it. norma gave me a t-shirt that promoted the great river road in kentucky and it is nice. i chose a medium shirt over a large because i’m currently wearing all of my large shirts very baggy. i can fit into a medium easily. we took a few photos together and the should be around the internet any moment(check here: https://www.facebook.com/promote.ky) they suggested that i stop at the columbus state park a few miles down the road. there was a story about how twenty five years ago someone had traveled the entire mississippi river stating that the best view they had was from a gazebo that is on top of a hill in this park. i had to go check it out. it was amazing. great view and great tip. i’ve got a photo below, but more on the camera, which will all come at a later date.

the remainder of kentucky seemed to go by quick, all up until the last few miles. the wind was in my face and i couldn’t do anything about it. it was a nice cool breeze, definitely welcome in the heat. as i came closer to the tennessee border, there were groups of bugs like gnats that were everywhere. the only thing i could do is be thankful i had on my glasses, keep my head down and mouth shut. when i stopped, i realized they were sticking to my sweaty skin. hundreds of bugs, all over me, some dead, some alive, all sticking to me. i couldn’t help but think of how much i wanted a shower.

i stopped at a restaurant around the corner from the campsite to have dinner. fish buffet! when i had finished, i realized i should never go to a buffet for anything. i had four platefuls of food, two deserts and a bloody mary. i. was. stuffed. i really hope i don’t feel this bad tomorrow, i don’t even want to move. the heat and humidity definitely don’t help. i just want to feel less stuffed, even hungry like i did earlier. reminder: don’t eat so much you fool.

all totaled i rode around 80 miles. i felt accomplished once again, even with the few people that i talked to saying that i had quite a ways to go. i’ve been through the mountains and i’ve rode about 2800 miles. the last 1400-1600 shoudn’t be so bad. unless the storms are rough. currently i am between a storm from the west and another from the southeast. hopefully they will hit each other and cancel out? i heard the one from the southeast will get interrupted by the mountains and go towards the east coast. i’d be fine with that, as the wind from the other will carry me swiftly southeast. day 34 done.