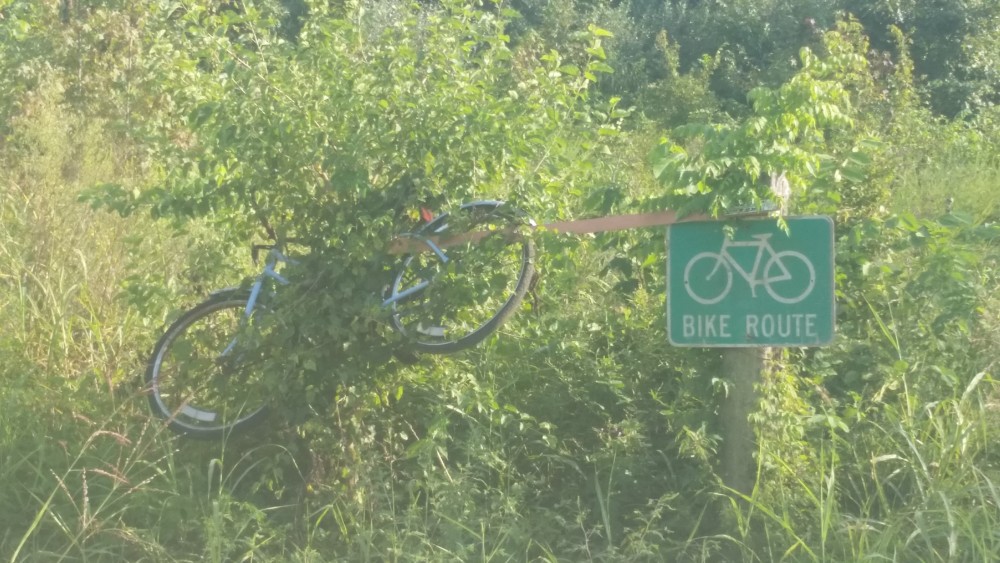 resting in chester was nice. when i was completed setting up the tent on dean’s deck, i looked for the closest place that had beer. there was a place only a block away! hurray! it was a swift ride downhill on my bike, especially with all of the weight off of it. i made a few quick friends at the bar, and we drank for a few hours before it was time to head back to get some rest. one of the fellows in the bar had mentioned that i shouldn’t go through cairo, illinois at night and that i should get through there as quick as i could. apparently there is a huge methamphetamine issue there and everyone is always trying to feed their addiction.

i woke up to birds chirping and when i stepped out of the tent it looked like i was in the mountains again. fog everywhere. i had relaxingly slept in for an extra hour. i would try to get into kentucky anyway. it was a mostly flat ride for the day and i didn’t see any reason that i couldn’t make it.

when i got out on the road, i went down the hill and saw more semi trucks than i’ve ever seen. there was probably 100 of them all lined up on the side of the road to pickup truckloads of something from a conagra plant. it didn’t really become an issue until i was past the plant. i was on route 3, which at that point doesn’t have a wide road, and doesn’t have a shoulder. all of the trucks leaving the conagra plant were paced to pass me three at a time. i felt they were a little close for comfort and had to find an alternative route. i found a turnoff about seven miles down the road that would take me on a levee road as well as through some farms for about thirty miles. perfect. when i turned onto the levee road, i noticed a pickup truck with a bicycle rack on the back. cool. i rode about four miles and found the cyclist. he said this was the best road to take and even better that it was flat the entire way. at the same time the wind started to pick up and i discovered that it would be in my face all day long…south south east winds about 10mph all day. i thought this was going to be easy. sigh.

a few miles northwest of gorham, i was in an even smaller town called neunert. i noticed a restaurant on the side of the road and thought it would be a great place to refill water. as i was parking a group of four cyclists arrived! i thought when i left missouri that i wouldn’t see many other cyclists since most of them are going east to west. the group was an older one, which made me even happier to see that age didn’t stop them. they were all between 70 & 84. we sat down and traded tales. they asked me about my ride and they told me how they were the outcasts of the older crowd, riding bicycles and being active. they all appeared much younger than they should have, no doubt due to their activity levels. after talking with them for a while over lunch they offered to pay. i graciously accepted and had enjoyed all of their company as well as the salad i had eaten. when we were all leaving, i thought i would give them a few minutes head start so that i could keep a pace with them, but it didn’t work out. they were fast. i’ll mention that i’m carrying much more weight and the wind on all of my bags slows me down, but seriously, these four can move. i never did catch up to them. i guess they meet regularly and do rides that go about 30 miles. if you four get a chance to read this, keep it up and thanks for lunch. i couldn’t have found a better group of people to dine with.

continuing on my ride, i started going through water faster. the day was getting a bit warmer and the humidity was also climbing. i looked at the map for the next closest town and it was only 10 miles. i arrived and stopped at the one store they had, the fast stop, but it closed at 2, and it was 2:30. i stopped at the post office which has become a good source of water if nothing else is around, but the post office had closed, only open four hours a day 8am to noon. in iowa, when i had talked with cindy at the post office, she mentioned that if a post office changes its hours down to four, then it won’t last a few more years. i’m sure this one is on it’s way out. last place to stop for water was the community center. also closed. great. next town was three miles away. when i got to ware, illinois, i realized that i couldn’t get all of the miles in for the day with the wind. the cyclists that i had met mentioned that the horseshoe state park would be a nice place to stop and i wouldn’t be too exhausted. ware has a few places to buy rocks, boulders and decorative stones, as well as a produce market. i went into the produce market and saw everything looked delicious and was priced much lower than i was used to. i grabbed a few oranges and bananas then realized it was cash only. dang. no cash. i did have some change. the owner asked what i was looking for and i said i’ve only got fifty cents. he said grab a banana and an orange and you’re all set. some people are just nice. they even filled my water bottles. if you’re in the area, definitely stop in and get some fresh fruit or vegetables.

a short time later i was in thebes. it looked like the town that time forgot about. grass was overgrown everywhere. dirt was covering most of the paved streets. a block in i saw a guy sitting outside of his mobile home that looked like a cross between “the cook” played by mickey rourke in the movie spun(cowboy meth cook) and “walter white” played by bryan cranston in breaking bad(science teacher meth cook). this didn’t seem like the place that i should be. i pedaled a bit quicker and got out of there. for at least a half hour after leaving i kept thinking about that movie “requiem for a dream”. how the addictions of people keep them from moving forward and eventually some really bad stuff will happen. that’s some motivation to get away from these places.

closer to the horseshoe lake campground i stopped for a catfish dinner at a diner. excellent and i’m glad that fish is becoming more common on my ride. i can’t wait for some good seafood when i get further south.

the delightful kelly(my warmshower in st. charles) was kind enough to reach out to her friend in chester that was also kind enough to let me camp out. he wasn’t there, but he’s got a great deck with a hose and a power outlet. all three things combined made for a great place to camp out. big thanks to both kelly and dean for being awesome people. out of the 115 i planned on doing today, i finished around 80. i would have definitely done the whole of it if the wind wasn’t in my face and my legs weren’t still a little sore from those missouri hills. tomorrow should be much easier and i’ll be in my 10th state. day 33 done.