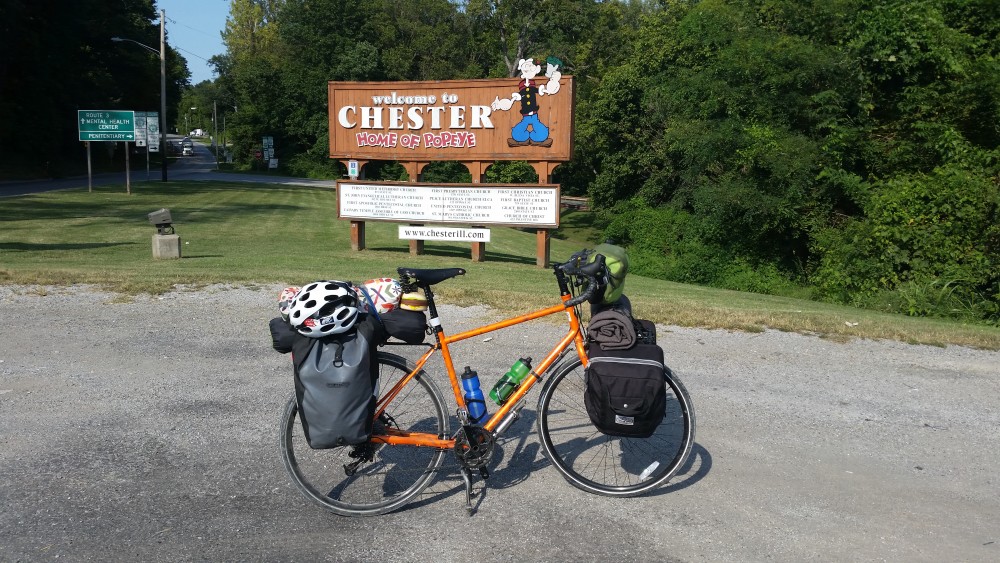 the hills yesterday wore me out. maybe i’ve had it too easy in iowa and southwest illinois. the good thing is i feel like today i’m back in the game. yes, i still feel out of shape after the hills, but i also feel like i am more prepared for them tomorrow.

the first thing i had to do was climb a hill to get out of the st. francois state park. I routed through google to get to chester. only a mile on us67 before my turnoff back to berry road. i rode berry road for about a mile until i saw the sign that said “bridge out”. in my experience so far along the ride, when this sign appears, you can still cross cautiously. this was not the case. the entire bridge was gone. not like it happened this year, but at least a few years ago. it was time to backtrack, which i hate to do.

i rode on us67 for a few more miles until i saw a turnout that led to berry road. i wiuld like to say it got easier, but hills. insignificant hills, false top hills, there were even a few that you could see almost the entire top side of a truck or van as they came towards me. i seriously thought i may see the rear vumper of some vehicles, thats how steep they were.

a few small towns later and i had to turn off on another road. only two short miles in, the road turned to gravel. mobile homes littered the sides of the streets and i suddenly realized that i was heading into northern meth country. i now have my pepper spray on my handlebar bag after being warned about dogs, and there were definitely a few moments where the dogs got a little close for comfort. i didn’t spray because i had no reason, but if a dog does get nippy, a squirt of mace will hopefully keep it at bay.

i rode further east until i was wore out, then stopped to get a bite to eat. i shouldn’t have eaten as much as i did bdcause everything felt like a watermelon just sitting in my stomach. maybe my stomach has become smaller since i’ve started my trip. i was uncomfortable for at least twenty miles.

reaching the gas station west of the bridge that leads to chester, i talked with a truck driver. he asked if i had passed or if i was about to pass the bridge. he told me there wasn’t room for a bike, anyone to walk, and even that they close the bridge when a truck has a wider load than normal. he offered a lift over the bridge and i was happy to accept. we loaded the bike on his flatbed and unloaded it five minutes later. it was all uphill to get to dean’s place, which was arranged by the thoughtful kelly, whom i had stayed with in st. charles.

today i looked at the stats for my blog today and i just passed 60,000 views and a week ago passed 40,000 unique views. this has become bigger than i expected and i appreciate everyone visiting and reading through my stories. only 56 miles for the day. day 32 done.