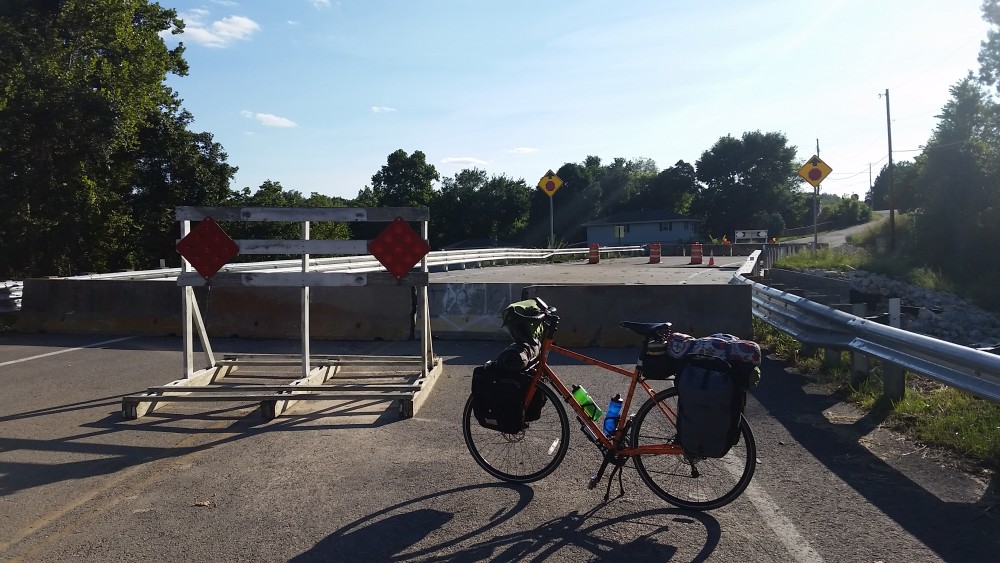 i felt great today. i’m not sure if it was the great company of my warmshower, kelly and eric, the delicious food they made for me, the beer, or just the bed, maybe a combination of it all, but it really refreshed me in a way that i haven’t felt since i started the ride. kelly, if you’re reading this, thank you for everything that you did for me. my experience with you and your home was beyond excellent.

kelly had also given me wonderful directions to head east through the city and to follow the river south. i was to stop at a great farmers market that was near the heart of st louis and be near all of the tourist stuff that i wanted to take photos of. a few miles(maybe 10) into my trip i looked down and realized that i had taken a wrong turn somewhere. if i wanted to go back, it would be additional miles. i thought: “hey, i can do this. i’ll just head south towards the state park and just skip everything else.” i really should have went back to where she had suggested. the roads were all hills, and it seemed like i was forever climbing.

i was attempting to cross the merimac river, when suddenly the sidewalk ended. down the hill i saw a bike path, but it didn’t go anywhere that i needed to go. i went down the hill and got on the bike path. i stopped to look at my gps but the next bridge that looked somewhat friendly was five miles or so east. i stopped the first person on a bike and asked if there was a safe way to cross the river nearby. he said no, and we talked for a few minutes. his name was rick. he said that it would be easier and safer if he just gave me a lift over the bridge, being that he had a truck in the nearby parking lot. i agreed and he drove me over the 141 bridge across the river about two miles. we talked about my adventure and we both agreed that i had stopped the perfect person to ask for directions. crossing the bridge in his truck definitely showed me that there wasn’t any safe way that i could have crossed there.

finally about forty miles out of the city, it seemed like i had hit a plain and it was downhill for a bit. the shoulders weren’t so bad and the sun felt great. rolling through the roads wasn’t as difficult anymore and i was cruising.

passing through values mines i started to see small signs all over that advertised how much of a big community that it used to be when mining lead was a big deal. it was interesting to see so many artifacts of years that had passed.

i hit more hills eventually and then rush hour came. the cars were all in haste to get wherever, and the shoulders seemed to disappear. i stopped at a gas station for a while to wait for traffic to slow down and got some ice water. leaving, i found quite a bit more hills and about twenty miles from the state park my legs just decided they weren’t going to do it anymore. i hit a wall. i stopped and rested for a moment, stretched out and i felt a little better. i pushed harder and made the rest of the journey. i believe my mileage for the day was around 80 after my mishap, but i would have to check a map to accurately gauge everything. sometime soon, i’ll plot out the actual route i took and then i’ll have a much better guess of my mileage. i think currently i’m around 2700 miles. day 31 done.