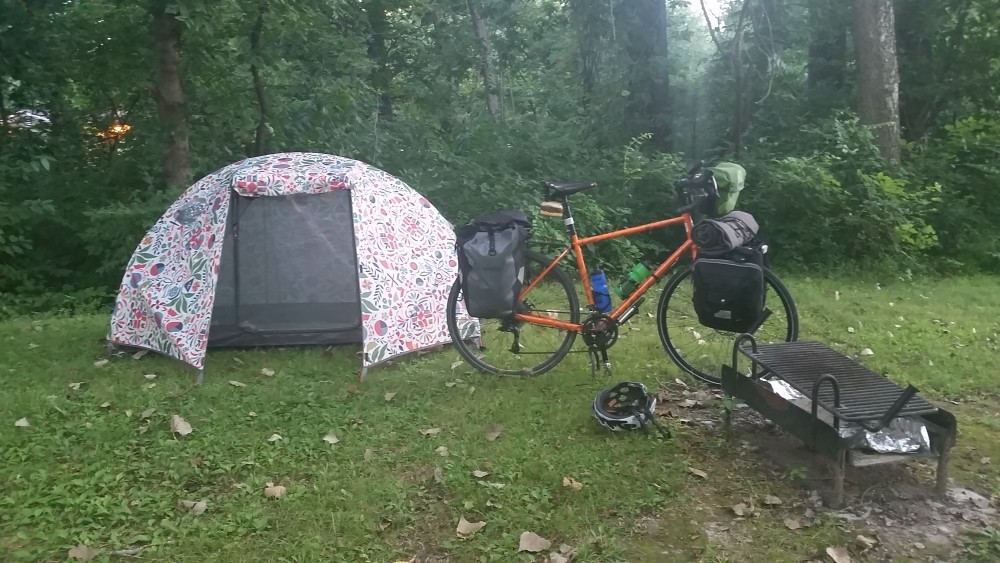 finally the wind was behind me. it was really behind me. i had a good distance to cover today and it went by like a breeze…or rather me on a bicycle with a breeze.

so the place i stayed last night…it wasn’t really, well, i’m not sure if it was a site. there’s a place, bear creek public use land. i found it online. it said there was camping, restrooms etc. well i followed the directions to get there and saw an rv down there. cool. go setup. wait. that rv looks like it’s been there a while. it’s got a refrigerator standing next to it, and someone has made a makeshift platform front porch. whatever, maybe someone just got comfortable. i walked down the road a little bit and found two abandoned houses. i couldn’t help myself, i had to go in one. it was ripped apart inside. i startled it’s current resident, a squirrel, who gave me the worst look. after poking around a bit, i left. it was really weird. the second house had all of the stairs broken, and i couldn’t climb up. oh, i forgot to mention that all of the houses were on stilts because of the possible flood area of the creek. i was camped in the possible flood area, between the river and the levee. about once an hour, someone came down the river on their boat. they should put up signs…telling people where the area is, because i don’t think i was in it.

i left early, got a good start to my day. i finished the first fifty before noon. the towns/villages/communities that were along the way were extremely small. places that had convenience stores that looked like they had closed twenty years ago. i was happy to find a place with water.

along the way, i met two cyclists. they were riding from minneapolis to st louis. good for them. they were a couple of older guys, and i had told me that there were originally four, but two dropped out the first few days. they were 10 days in, and stopping one more time, making their total trip 12 days. they said they were doing maybe 50-60 miles a day, and when i told them i was doing a century today, they looked at me like i was crazy. there were a few reasons.
1. i liked the sound of the campsite 106 miles away, it has showers.
2. with the wind behind me, it wouldn’t be as difficult as they imagined.
3. by riding 100 today, i can do 30-40 tomorrow and stay with a warmshower in st louis.
4. the 40 mile day should be finished before noon, so i’ll have an afternoon to relax.
5. the weather is perfect.

the other guy said they were stopping for a sandwich in nine miles, but he didn’t know the name of the place. funny thing is, they were on the same route as me and i didn’t see a restaurant or town that looked like it would have one for about twenty miles. i hope they made it.

the last 60 miles or so were hot. not overly hot, but the humidity here is a lot heavier than when it was 115, or when it was 106. those days were dry heat. i’ll be working my way further into more humidity and i hope it doesn’t slow me down.

106 miles for the day and it made me feel accomplished. day 29 done.