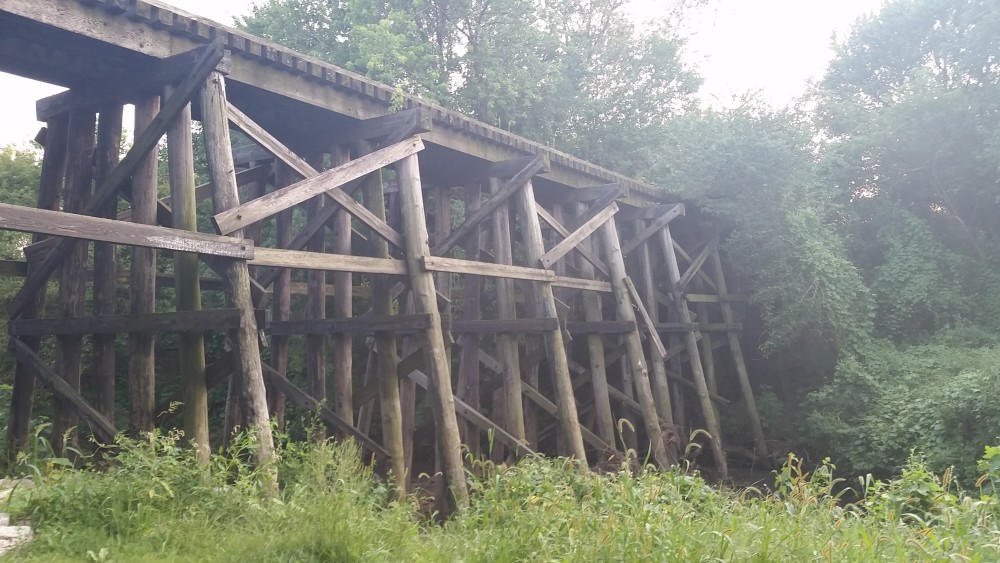 i awoke in the lewis and clark state park. refreshed and ready to go. then i saw the cloud over the park. it was a storm. unexpected and unwelcome. i stayed in my tent and looked at the radar. apparently it would be gone before 6 am. relief. i waited for it to pass, shook off my rain fly on my tent and packed up.

across the highway i made friends with the cashier at the convenience store and drank coffee. i wasn’t ready to go. the winds were coming from the southeast, which was where i was supposed to go. finally, after a few cups, i made my way to the road.

my experience with iowa roads hasn’t been great. there’s not really much of a shoulder and there hasn’t been one either. let me better clarify that. there is a shoulder on some roads, but it’s all crushed limestone. not fine limestone, but more of a gravel. one inch rocks. they throw you around and slow you down. a few hours into my day i realized something wasn’t right. my handlebar bag was a little to under crowded. i had left my patagonia houdini jacket somewhere. that was the only real layer that had saved me from some storms and kept me warm early when it wasn’t appropriate to wear a longsleve layer. i know exactly where it is too. maybe not exactly, but close to there. it was 213 johnson street in sloan, iowa. i had stopped to take a rest. i pulled a few things out of my handlebar bag and put my jacket on the front rack of my bike. it probably fell off within a block of there. i know there won’t be anyone that reads this and says “hey, i live there, i’ll go pick it up!” but really, it looks like its the size of a coke can, lime green and will probably get run into the ditch at some point. but if you are there, keep your eyes open. those jackets are nice and i hope whomever picks it up enjoys it and uses it often.

so i rode for about 36 miles into the wind. i couldn’t take it. i knew i would be hours to get the total 100 miles in for the day to get to my destination. i made a judgement call and started heading north of des moines. i know, it’s out of the way, but it’s really where i would be headed if i followed my itinerary exactly. when i woke up, i thought i would make it easier and head closer to st louis. it wasn’t the best idea. i found a campsite northeast of des moines. the hills were minimal and the wind wasn’t directly in my face, more to the right side of me. i pushed on. fifty miles. i stopped as i do in small towns, heading into gas stations and refilling my water bottles. i’ve become quite good at my water weight. i’m carrying my 48oz and 32oz nalgenes empty because i stop so often. i have a 32oz that i bought a week ago before the badlands, but i call that my reserve. stopping more often to refill my two 24oz bottles is much easier than carrying all of the bottles full. anyway, back to the stop. i had refilled my bottles and was about to leave. a guy came up with his puppy and started asking questions and talking with me. he just returned from six years in hawaii. before that he lived in flagstaff. he was excited for my trip. after showing him the route i took, he laughed. he explained i could have cut directly from sioux city on the 141 and saved about 100 miles. oops. i guess i wasn’t thinking about that. sioux city was a little stressful and i just wanted to get out of there. he told me about the sauk trail and that i should take that. i looked on the map and saw that it was easily accessible right before carroll and i could avoid the city by taking that, and it went directly to the campsite.

heading east for another twenty miles or so, then i found the trailhead. it was a nice path, paved and even had people using it. i rode through and stopped at one of the benches to get on. i sat and had a quick dinner on a bench. a father and his two kids were riding by on the trail and one of them said “oh wow dad! look at his bike! he’s carrying so much stuff!” i smiled and said hello. while they were riding away, the kid asked his dad “do you think he’s moving? he has a lot of stuff on his bike.” his dad said no, and then said something else that i couldn’t hear as they were riding farther away.

iowa has been the first state that i’ve been to where everyone slows down to look at you. they all want to see me. people slow down on the other side of the road, people slow down passing, people stay at intersections for unreasonable amounts of time, just to watch me pass. i feel like i’m on display. like everyone needs to see. it feels weird. i’m not used to feeling so watched. i had hit my left ankle on my pedal a few days ago. i didn’t think much of it and it hasn’t bothered me until today. it feels swollen and bruised. i actually took some advil to make it a little more bearable, but it didn’t help much. i completed about 88 miles for the day.

i’m taking a rest day tomorrow, but i’ll still be riding a bit. i get to see lindsey and we’re camping at the koa. okay, maybe i won’t be resting too much. day 26 done.

i swear i took more photos, good ones too. they’ll be more interesting next time.