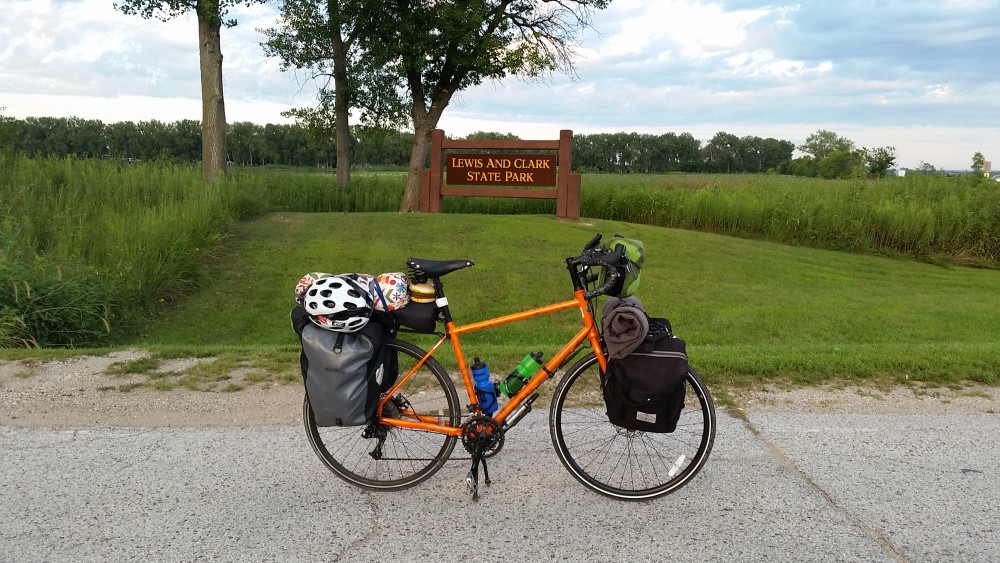 today was a slow day. i awoke and immediately determined that it was too cold to start riding and went back to sleep. maybe i just needed the extra hour.

riding after that was still slow. i didn’t feel like i was keeping a good pace, but it was nice out and i wasn’t really in a hurry. i did 77 miles today. it may have taken longer than the 95 yesterday, but i was into the wind today and a little relaxed. yes. me. relaxed.

i stopped in a few small towns on the way to sioux city. one of them i met a very nice woman at the post office and we talked for a bit. she gave me some advice on how to get around traffic in sioux city and to avoid the west side of the city. the basic idea was to avoid the whole city. go to north sioux city, take the bridge to nebraska into south sioux city, then take another bridge to where i needed to be. this would avoid all the construction. it worked out, and i even found some nice bike paths to take that mostly got me where i was supposed to be.

after i got back in place, there wasn’t any shoulder on the road. seriously. the paint couldn’t even stay on the road. i don’t really care for that, i like the shoulder and use it as much as i can. i had some anxiety for a while riding. you can’t get out of the road and theres so much traffic that the cars don’t know how to pass you. stress city.

after riding like that for about ten miles or so, the traffic was thinning out. most of the other days, i could have picked an alternate route, but today it was either the highway(nice shoulder, heavy traffic), the interstate(medium traffic, no shoulder), or the dirt roads(additional miles, slow speeds). i stuck with the middle option. for the few moments i had to get on the highway(actually the sidewalk on the highway) to cross the bridge, it was noisy. i’m not used to the noise. it was loud. i ended up putting in my earbuds without music just to make it quieter. i feel like i’ve been out in the wild for so long that i’m unaccustomed to the noises that i’ve been accustomed to for the past years. quiet is when you see six or seven people in a day. today was not quiet.

tonight i’m at lewis and clark state park in iowa and it’s next to a lake. i thought, how nice, it looks really peaceful. i was even being serenaded by the crickets on the way up to the park. setting up was simple, i finally got a shower, then i sat down to cook dinner. as i cooked dinner, i became dinner for the mosquitos. they were everywhere. swat one away, two show up on the other side. i basically ate walking to take care of my trash, because if i stopped then the bugs would swarm. i shook them off and jumped into the tent, making sure that my zippers are fully zipped. this place would really be peaceful if it wasn’t for the mosquitos and the highway noise that is a mile away. day 25 done.