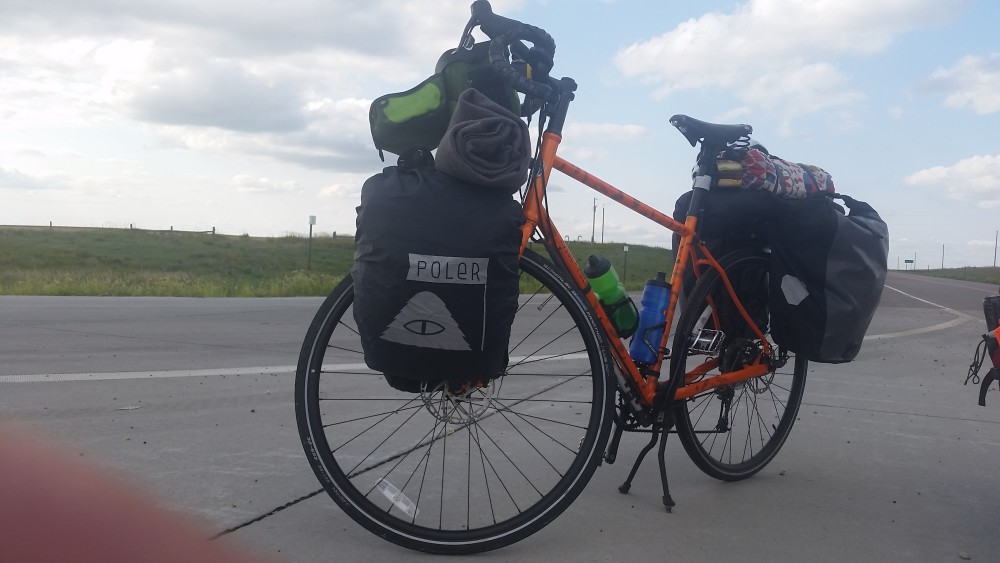 a night of rest in the white river campground wasn’t bad. i was able to catch up and clean my drivetrain on my bike, also doing some tuning. it needed to be done for a few days, but i needed a source of running water and time. both are hard to come by at the same time. i woke up and discovered that there were 10 or 15 mosquitos and a spider in my tent. i left the zipper unzipped about an inch. everything got in. after waking up and getting everything in order, alexei had the same issue with mosquitos. he has bites all over his forehead. it kind of looks like an allergic reaction.

we got all packed up and the storm that was supposed to hit north of us looked directly on path to us. we stopped at the store for coffee, then the rain started. we went back to the playground next to the campground for shelter. i was able to patch the two tubes that i had neglected, then changed the bolts on my rear rack, adding loctite to them so that they wouldn’t shake loose like they have been for the past week or two.

the rain stopped an hour or two later and we started rolling. we stopped by the cafe/casino on the corner so that alexei could adjust his seat and saw two bicycles packed up. i ran in excited to see who it could be. there were two guys from denmark that had rode from new york on their way to san francisco. we discussed what was ahead for them and what was ahead for us. we traded old maps and kept moving.

the ride was a late start. it didn’t help that there were hills like yesterday and the wind in our faces the whole time. we were pushing hard. every time we got near the top, another top would appear. the downhill was slow because of the wind and the uphill was slower because of the uphill and wind. it was exhausting.

about halfway to winner we ran into another two cyclists that were heading from pittsburgh to portland. they let us know that if we kept on the same route, continuing to the missouri river and crossing the dam, we would have a giant hill on the other side, then it would flatten out. i’m really excited for that, but at the same time, i have become so used to the hills that i may miss them. it’s a hate as well. they slow me down, they demotivate me, and they never end, but i really don’t mind them.

alexei and i stopped in winner for dinner at pizza hut. we split a large supreme and it pretty much disappeared instantly. we talked about our options. we could go the remaining 36 miles and arrive late, or we could find somewhere close and hopefully start early. to avoid the wind and extra exhaustion for the night, we finished the day as winners in winner.

tomorrow should be a little easier, getting the extra miles won’t be a problem. according to my schedule, i’m currently about 42 miles ahead. once that road runs flat, i’m going to take off like it’s nobody’s business.