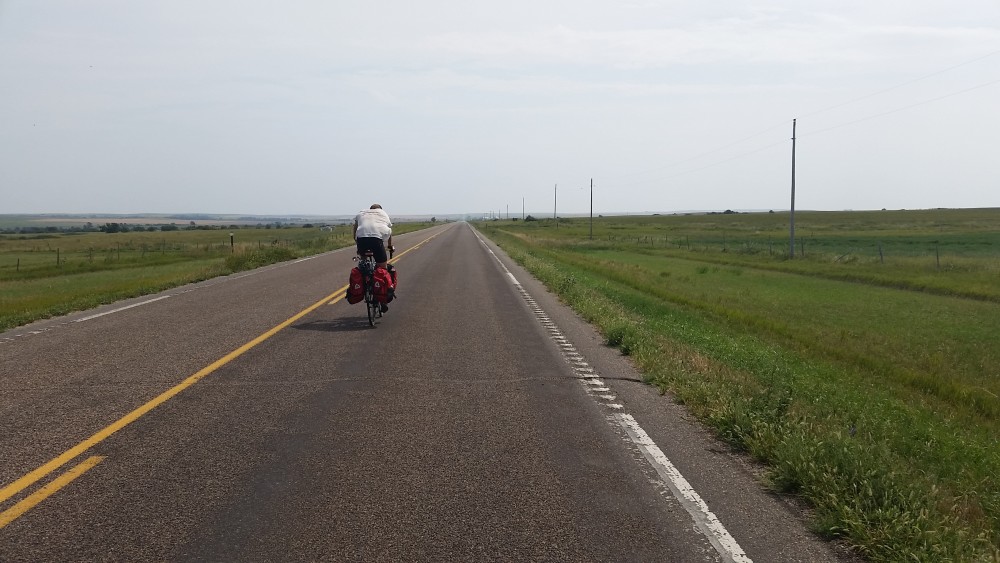 three weeks in. 1800 miles or so. wind and hills do not mix. after a well deserved night of rest at the koa in the badlands, it was time to start my day. i didn’t want to get up early, because it was supposed to be raining all night. i slept in until six, then woke up alexei at 6:45. we drank some coffee and got everything in order.

the plan was to go to white river and if we had heard back from the warm shower in miller, head another 20 miles south. after a week or so of weather that was never below 90, it was a cool day at a reasonable 86 degrees. you could feel the heat, but not as bad as yesterday. we started on our journey and then the wind hit. there were gusts ranging from 20-25 mph all day. we figured that it was only 20 miles or so until the next town, so it wouldn’t be so bad. then the hills appeared.100 feet up steep, then 100 feet down not steep. repeat that about a hundred times and that was the ride. wind in your face, hills taunting you from behind the wind. every one of them had a false top. getting up these hills was a challenge, even after the mountains. it’s not that they were significant hills that i wouldn’t be able to climb, but i had extra water weight from getting nervous about water in the badlands and the wind. oh the wind.

pulling into white river, we found there were only two stores. gus station I and gus station II. someone definitely has the monopoly. on the edge of town, there was a native american ceremony, which appeared to be a thoughtful remembrance for those who had died in the past. we stopped at gus station I, got some supplies, then went to the white river cafe, which the internet said has much better food than the casino next door. while we were preparing to leave, the place started to get crowded. the rodeo had just ended and everyone was hungry. seriously, that’s what happened. we pedaled over to the free campground that they have next to the rodeo and setup camp. i did some bike maintenance that i had been putting off for a bit and now everything is squeaky clean(in a good squeak of way). day 20 done.