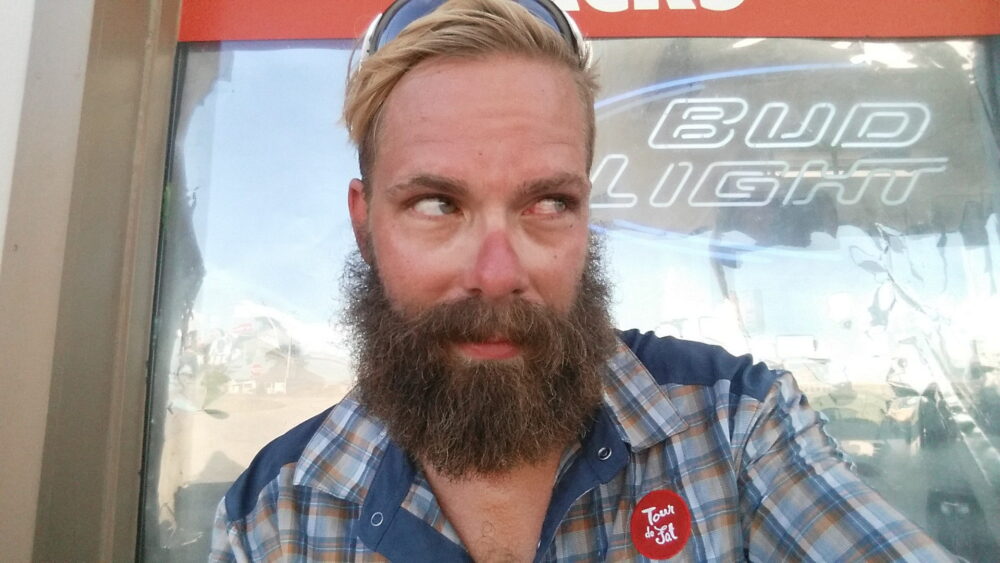 i woke up early to get a nice start on the ride. it was 103 miles from the climbing area by mount rushmore to my campsite. i knew it would be hot. thankfully, my grade chart said it was primarily downhill. today i found my third multi-tool on the side of the road. i have no idea why people keep leaving these on the shoulder, but thanks!

it was a beautiful morning riding through the black hills towards rapid city. i stopped for some water about an hour into my ride and kept moving. rapid city, well, maybe i didn’t see enough of it. it seemed like it was lacking a bit of fun. they do heavy to promote mount rushmore, and i’m sure if they tried the town could be much bigger. there were posters all over town that said “do great things” and showed mount rushmore on it. i knew departing the town, i’d have a long ride with possibly no water fillups along the way. i refilled before i left.

about fourty miles later, there was a small town(two or three buildings, same amount of houses) called scenic. i thought since i was there, i may as well fill water again. i went up to the only store, and *poof*, i saw another bicycle fully loaded. I grabbed the bottles and went in. in the back of the store there’s a small table with chairs, like a fold up lounge area. he was sitting there talking to another traveler. i went up and said hello. his name is alexei and he’s riding from los angeles to toronto. after a few minutes, i asked if he had a place to stay tonight and he didn’t. i told him i would be happy to share my site, but it’s still 33 miles away. we left shortly after that for the remainder to be covered.

the badlands are cool. very interesting natural formations that don’t look like any terrain that i’ve been through yet. it was an interesting change. the change was pretty sudden actually. thankfully, the ground was flat, but the heat, 106 degrees hot. we both were sweating like crazy.

a few hours later we arrived at camp. first mission, pool. second, shower. third, dinner. i wanted to clean my bicycle drivetrain, but i was just too exhausted. talking to alexei a little more, i found he’s headed towards milwaukee, then the ferry across, then the detroit/canada border. we can ride together for a few days to ease the solitude that we’ve been through. it’s nice to have someone else to ride with. day 20 done.