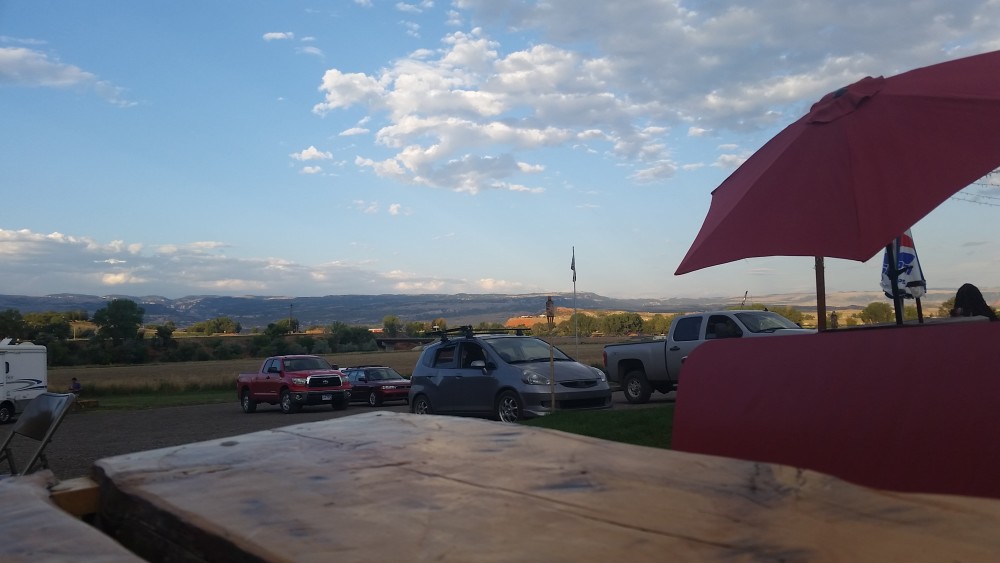 after a night of relaxing in the pool at the koa i was sure to feel rested and relaxed. i had high hopes for the day. i would leave greybull, head south towards ten sleep, then climb. i had a perfect site picked out just past the peak of the mountain. then heat happened.

it wasn’t as hot as the basin, it was hot though. it was 96 degrees from 9:30 until who knows when. the towns kept getting smaller as i passed and i knew i was ready to stop at the post office to send back unused stuff. if i don’t use something for three or four days, there’s no reason i should be carrying it. i stopped into a small town, 114 on the population sign and saw a post office. there weren’t any stores in the town so i asked if i could fill a few water bottles. it probably looked unreasonable when i came back in with five. i had drank almost all of my water, but still hadn’t peed since i left the campsite. i knew i was getting dehydrated but i thought maybe the extra water would be good enough to hold me over for the next 20 miles. i drank almost all of it. my kidneys started hurting, i looked at my shirt and it was crusted with sweat and salt stains. sweat was dripping off of me faster than i could drink the water. my vision started to get blurry. out here there isn’t anything that you can do to escape the heat. i found two trees along the way where i could get under them for a moment to escape the heat. even in the shade there is a hot breeze. there is no escape. i wanted to douse my head in water, but i couldn’t risk losing the water.

as i approached ten sleep, wyoming, i saw a sign. beer. it was a billboard and it said that once i got to the intersection i would have to go a half mile in the direction opposing the town i was headed to. i made a call. beer and the possibility of ice water.

i arrived at ten sleep brewing company, which was amazing. they have camp sites for $3 and showers for $2. not to mention beer. i walked in holding my 48oz bottle out asking for ice water with a dry throat and scratchy voice. i hadn’t realized that my voice was so rough. lack of water really does that. i pretty much drank the entire thing. then ordered a beer. the bartender told me a story about a family that just died in arizona from dehydration and that i should be more careful. i thought almost two gallons was being careful. i need to figure out what to do before i get to the badlands.

i’m all setup at the site, i’ve met quite a few people here and i’m happy that i stopped. aside from the great conversations and knowing that i have a site, i’m relaxed.

at the koa last night, two women setup camp a site away from me. i noticed they had wisconsin plates and we began talking. they’re two derby girls from milwaukee and they were on the way back from a wedding that they attended in montana. they were hitting hot springs along the way and had also been to sturgis. speaking of sturgis, if i never heard another motorcycle, i’d be happy about it. day 16 done.