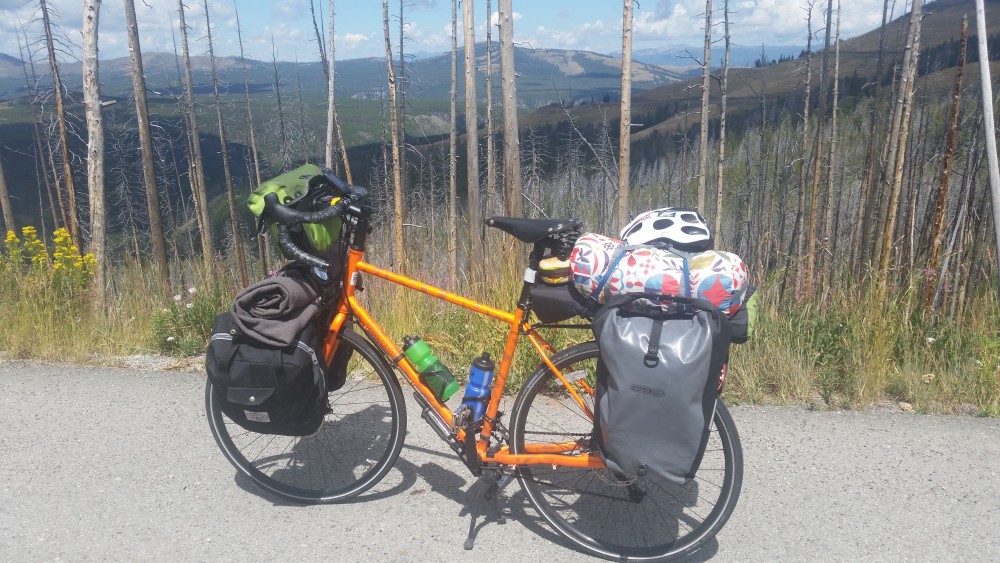 the day after the rain hit, paul and i begun collecting our things and cleaning up camp. i don’t feel that either one of us wanted to go our separate ways, but he has a different route and schedule. our time spent together yesterday was great and we met many great travelers.

since i didn’t ride yesterday, i had actually saved miles. by not going to the madison campground(southwest) i could shoot straight for cody, wyoming and skip the extra miles that the other site would have added. i thought it may be a challenge, but i had no idea what i was in for. tower fall campground is at 6270 feet. it’s enough to shorten your breath a little. the first pass was up to 8800, my gps said i climbed to 8807. climbing that high really takes a toll on your lungs and makes it difficult to ride. you try to climb as you normally would, but the thin air doesn’t let you breath like you should and your heart gets pumping too fast.

the downhill was great, and i definitely felt like it was worth it. things moved very quick. i stopped in the canyon general store, first had lunch then tried to find a pair of pants that fit, since the temperature has dropped so much at night in the mountains. the pair i found in my size were apparently mislabeled and i didn’t realize it until later. i was able to zip them up, but not button them. i can’t keep them because what’s the use of carrying pants that i can’t actually wear, even if i do shrink into them. tomorrow i’ll check if there’s a store in cody that sells them and if not, i’ll have to send them back to the company.

i was able to catch a heard of bison grazing in the valley and it was really cool. i remembered that the ranger had told me to shadow cars because the cyclists look like a predator near the bison and they’ll charge you.

the second pass pretty much knocked the wind out of me. thankfully one of the people that i had talked to on the first pass stopped and offered a ride. i was really grateful, as i had to cover 104 miles. we’re now facebook friends and it’s great to see that they are all inspired by my adventure. while sitting in the bed of the truck i we were on our way down the second pass. up the side of one of the mountains, a black bear was charging downhill. directly towards us. it was a little unnerving. i had never seen a black bear and there it was, charging right for this tasty, meaty cyclist sitting out for it. had i been riding, i could have easily become dinner for the beast.

they dropped me off near the edge of town and told me about a campground that was a mile away. i called my warmshower, who didn’t answer, then i called again a half hour later. i hate it when people bail out like that. i made it to the campsite just before the office closed and was able to secure a site. i’m still deciding on whether to ride through the middle of the big horn mountains or go south for a few thousand feet less climb and an easier grade. i could use a break around now. i’ve also passed my first 1000 miles today, making it close to the first quarter of the ride. day 14 done.