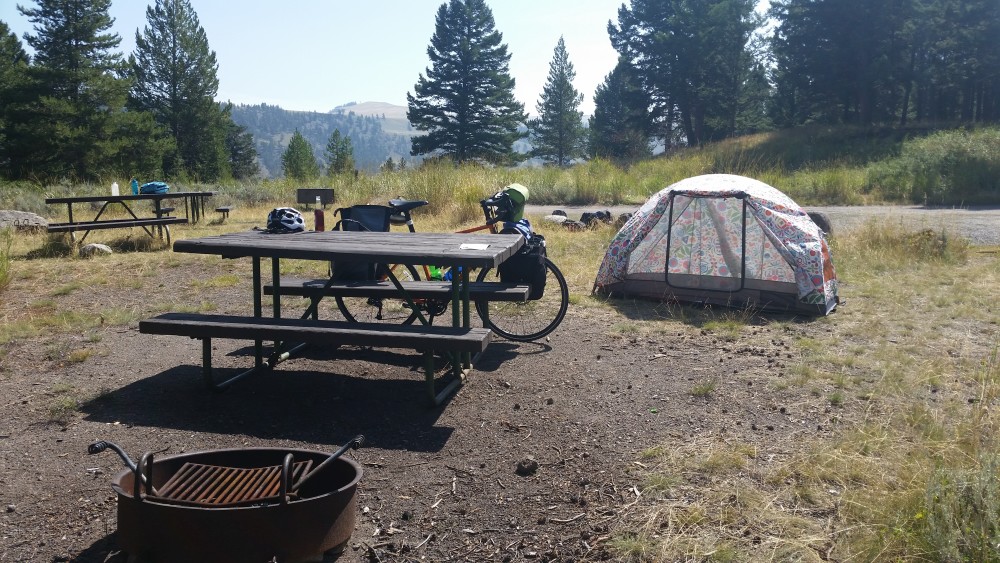 gardiner to tower fall campground really doesn’t seem like it’s too far. 26 miles. the campsites are first come first serve, so i wanted to leave early. the warmshower that i was staying with last night, john bradford, works in the park and offered to give me a lift up the first big climb. only three or so more after that, and it’s an uphill ride until you get to the campground.

i was tired from the day yesterday. i was trying to find any reason to stop so that i could be distracted and rest for a moment. on the way into the park i saw some people with knit caps on and thought that would be a good idea since the temperature felt colder this morning. i stopped at the first store i saw, in mammoth and picked one up.

it was 7:30a, and the traffic was already crazy. everyone was either speeding or stopped in a jam in the road waiting for wildlife to pass. i raced to the campsite and finally arrived around 9:30 or 10am. full, the sign said. i had talked with a ranger on my ride up and he told me that i should give them his name and request a hiker/biker site. they’re reserved just for hikers and cyclists. i did that and sure enough, they had a special plateau for the non-car group. i setup early. it got hot. i stayed in my tent to escape the heat for a bit, then wandered down to the general store to see if i could find some sort of entertainment.

later on in the day i met paul. he is another cyclist, traveling from missoula to boulder. there was also a hiker that showed up. him and a few of his friends were doing the great divide trail and had to hurry because of an upcomming wedding.

yellowstone is beautiful but they need a limit on how much traffic they can get in there. it’s seriously crazy.

gardiner in the morning