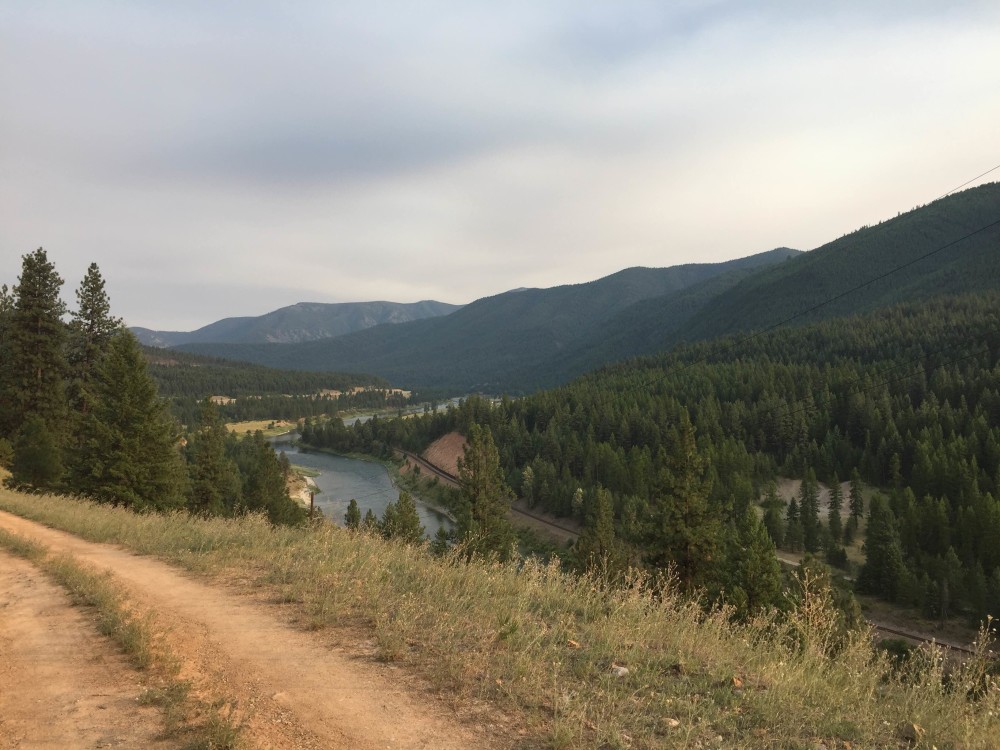 what a day. i’m really not sure how many times i’m going to say that, but man, the day took a toll. io didn’t rest very easy last night and i feel that took a big toll on my body. this morning i got up and ready and it didn’t even feel like i had rested. total today, i had about three miles on paved roads. the rest were all dirt, gravel, riverbed gravel and sand. it was exhausting. i think the temperature maxed out somewhere around 100, but one moment i looked at the gps and i swear it said 114. the weird thing about the heat her is that there’s almost always a cool breeze. it was great to have that breeze blowing behind me, but it didn’t help much because of the gravel and water damaged roads.

the climb up the pass was intense. i swear i’ve never worked that hard to get somewhere ever before. i had to climb up to almost 5000 feet and it wasn’t paved at all. since there was water damage to the dirt roads, giant crevices and divots were everywhere that proved this road wouldn’t hold up much longer if it rains heavily. the downhill ride was rough. even though i had charged my go pro ahead of time to make sure not to miss that moment on film, i couldn’t record it because it was such a slow descent. had i been going to fast, i could have easily gotten stuck in a crevice, hit a rock and either damaged the bicycle or hurt myself. i had to be cautious. ascending and descending today took roughly six hours. it wasn’t easy and i had to push my bike up the mountainside for a while. the reward was great. i wouldn’t have even noticed had i not turned around when i reached the summit.

after finally reaching the base of the mountain, i attempted to gain some speed on the dirt trail, then turned to gravel, then it turned to railroad gravel, then it turned to riverbed gravel. i’m not a fan of any gravel, but all the gravel they were using made my bike jump around and lose it’s footing regularly. i had to stop every three miles or so to tighten the bolts on my rear rack. that’s a lot of bumping around. in comparison, i generally make sure my racks are tight about once every six months when i ride around chicago.

i know i started the day with 130 miles to missoula. i currently have 75 left. i don’t feel like it looks good on paper, but man, today really hurt.

great news is that i can climb longer, handle myself better on gravel, and my endurance is going through the roof. the scenery today was better than yesterday and my new favorite thing to do when i see a gas station or convenience store is fill up on ice water from their fountain drink machines. none of them have asked for me to pay ever, but i probably look insane. maybe tomorrow i’ll post a selfie. my nose started peeling today since it’s been burned. i’m getting much darker every day and keep applying sunscreen. i even upped my spf. there’s not much you can do when you’re out in the sun for so long. lindsey was awesome(as usual) today and helped me find somewhere to camp so that i didn’t have to lose sleep again. she even went so far as to set me up with a place in missoula with her friend tom. i just realized the time change happened, and it’s past my bed time. third state visited, day 06 done.

side note. the cover photo for this post was taken from a road that is clearly available to use on both google maps and ridewithgps. it was basically unrideable since it was primarily sand. also it was blocked a few times. i probably should have found a different route.
“freedom lies in being bold.” -robert frost.

about halfway up my climb.

view from the summit.