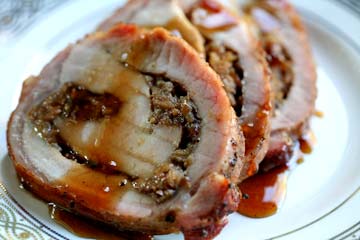 okay, so it really wasn’t a bicycle bbq. it was more of a handful of cyclists visiting a friend that was introducing her new daughter to them. it was a lot of fun and i was happy to see everyone. the variety of bicycles was great too. i had discussed my theory of potluck dishes with people and hopefully made a few conversions. you see, whenever someone has a potluck everyone wants to bring a side dish. corn, chips, potato salad, potato salad, potato salad, etc. if a few of those potato salad people(or any other common summer dish) decided to bring a main entree dish, the balance would be restored. my dish yesterday? apple cranberry pork roast. moving it and making sure it was hot took a little more planning. i baked it not as recommended, but thoughtfully. about 300 degrees for an hour and a half. it was almost up to temperature, and still juicy. i wrapped it in foil, then a towel, then tossed it in a six pack cooler. when i got there, after about an hour i threw it on the grill and glazed it. everything was fine. lots of compliments about it too. i love cooking.

today i go see the fine folks over at ten speed hero and then i reeeaaallllyyy need to finish my route planning.